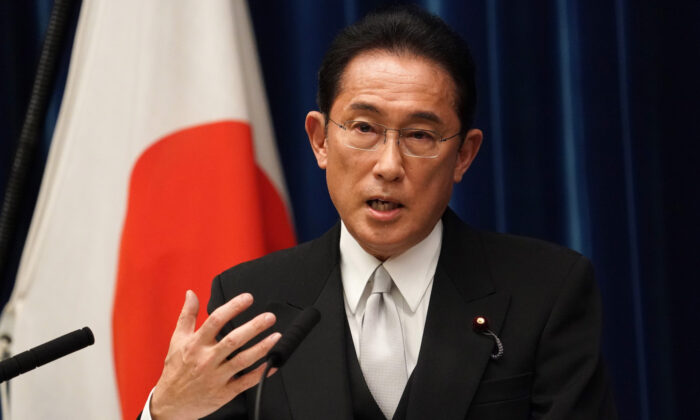 Japanese Prime Minister Fumio Kishida reiterated his commitment to bolstering Japan’s defense posture by looking into “all options,” including the acquisition of “enemy base attack capability,” indicating a potential shift from the country’s post-war pacifist constitution.

In his policy speech on Dec. 6, Kishida said the government would revise the National Security Strategy, National Defense Program Guidelines, and Mid-Term Defense Program in a duration of roughly a year.

“We will realistically examine all options, including possessing what is called enemy base attack capability, without excluding any possibilities, and, with a sense of speed, fundamentally reinforce our defense capabilities,” Kishida said, reiterating the commitment he expressed during his first troop review in November.

Acquiring enemy base attack capability has been a contentious issue in Japan as it could violate the country’s war-renouncing Constitution. Article 9 of the Japanese Constitution contains a “no war” clause that forbids the use of force or threat as a means to settle international disputes.

Abe had earlier warned China that Japan and the United States could not stand by if China invaded Chinese-claimed Taiwan, given that an armed invasion of Taiwan would pose a serious threat to Japan.

“I will say to China the things that need to be said and strongly urge China to act responsibly, while at the same time cooperating on matters of common interest and aiming to build constructive and stable relations,” Kishida said.

The prime minister also aims to develop Japan-Russia relations by resolving the territorial issue and concluding a peace treaty, adding that he would continue to urge North Korea “to make appropriate responses strongly.”

“I will visit the United States at the earliest possible date and meet with President Biden for talks, further reinforcing the deterrence and response capabilities of the Japan-U.S. alliance, which is the foundation for the peace and prosperity of the Indo-Pacific region and, indeed, the international community,” he said.

Last month, the Japanese Maritime Self-Defense Force (MSDF) and the United States Navy conducted their first joint anti-submarine warfare exercise in the South China Sea, stepping up their capabilities in the disputed sea where China claims sovereignty to almost all parts of it.