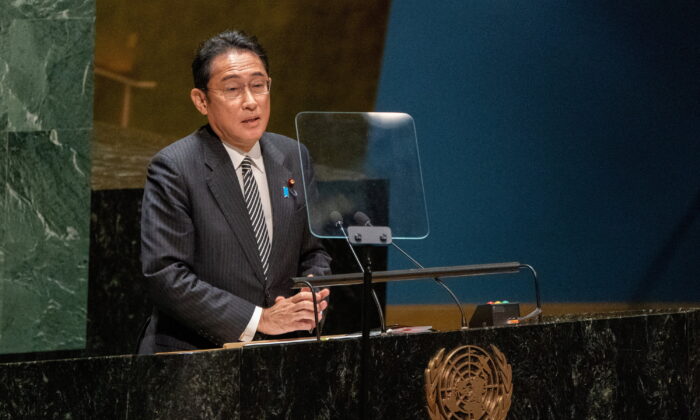 Japan has pledged to contribute $30 billion over three years to support Africa’s development and economy as it seeks to enhance cooperation with the continent amid China’s growing influence.

“Japan aspires to be a partner growing together with Africa,” Japanese Prime Minister Fumio Kishida said in a virtual address to the 8th Tokyo International Conference on African Development on Aug. 27.

Of those funds, he said Japan would invest more than 10 billion yen ($72 million) in African startups and provide training to 300,000 Africans in various sectors over three years for human resource development.

The Japanese government also will provide $130 million in food aid and co-finance a $300 million loan with the African Development Bank to boost food production amid the global food and energy crisis.

“Through these measures, working together with Africa, Japan will contribute vigorously to African development based on African ownership,” Kishida said.

Japan’s move comes as China announced on Aug. 18 that it would waive 23 interest-free loans for 17 African countries that had been due in 2021.

Chinese Foreign Minister Wang Yi claimed it was the Chinese regime’s concrete action to advance the “high-quality Belt and Road cooperation,” a global infrastructure plan that critics have denounced as “debt traps” for smaller nations.

According to China Africa Research Initiative’s database, Chinese financiers signed 1,141 loan commitments worth $153 billion with African governments and their state-owned enterprises between 2000 and 2019.

Economist Davy Jun Huang said the Chinese Communist Party (CCP) timed the waiving of the loans to suit its purpose, which was to gain diplomatic support from African countries.

There are predatory measures in the CCP’s debt-trap diplomacy (pdf), such as access rights to local mines, power plants, and ports, which are counted into the economic aspects of a loan, according to Huang.

Huang anticipates that new forms of debt will accompany loan forgiveness and that there will be undisclosed trade negotiations, which will only further the dire situation of these African countries.

U.S. Secretary of State Antony Blinken visited South Africa on Aug. 8 and established the U.S. “Sub-Saharan Africa Strategy,” which outlines four U.S. priorities in concert with regional partners in sub-Saharan Africa over the next five years.

Blinken said the U.S. International Development Finance Corporation will allocate $300 million in financing toward developing and operating data centers across the region, including in South Africa.

The Group of Seven nations also announced in June that they’ll raise $600 billion over the next five years for a global infrastructure program that will serve as a “positive alternative” to models that sell “debt traps.”