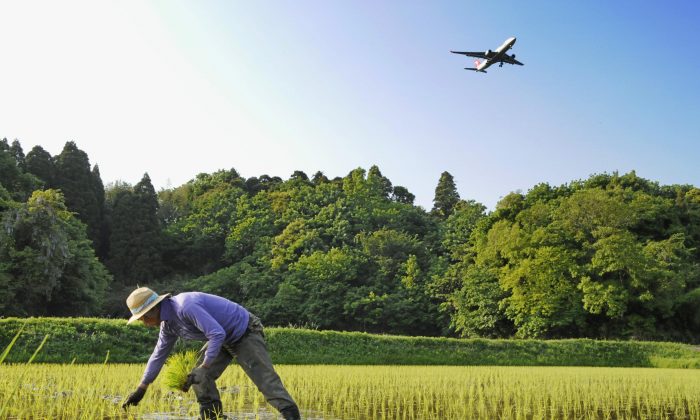 Japan, by far the second-biggest economy in the Trans-Pacific Partnership (TPP) behind the United States, played a key role in finalizing the trade pact in Atlanta over the weekend.

The accord represents Act II of the strengthening relationship between Japan and the United States (and America’s pivot to Asia), following the milestone achieved this summer when the two countries renewed their military alliance. Japan agreed to step up its role as a full partner by providing military support to the United States in the Pacific region.

For Japan, the TPP is also part of Prime Minister Shinzo Abe’s aim to strengthen the economy under “Abenomics” by boosting the country’s GDP through increasing exports to other Asian countries, the United States, Canada, and Peru. A boost is certainly needed, as Japan’s economy is moving toward a real crisis point as its population ages and economic growth stagnates.

But there is a cost, as there always is, and in Japan’s case it was allowing increased imports of farm products and lowering some tariffs, aspects of the agreement that could significantly harm its farmers, especially those who grow its most important traditional crop: rice.

Their growing ire is among the many obstacles that remain before TPP goes into effect, as the pact must still be agreed by legislatures and other bodies in the 12 participating countries.

For the most part, the current agreement maintains some of Japan’s ability to protect its domestic industries, especially beef and rice, despite heavy pressure from the United States during earlier bilateral talks.

Still the current deal that concluded October 4 includes lower tariffs on meat (beef and pork) and rice, considered two of Japan’s five “sacred” domestic products (wheat, barley, and sugarcane are the others).

Currently Japan imports 770,000 metric tons of rice to meet the rules established by the World Trade Organization. About half of these imports come from the United States, the biggest supplier, followed by Australia (another TPP partner).

Once TPP is fully implemented, rice imports from the United States may increase by up to 50,000 tons annually during the first three years, up from 10,000 now, and by as much as 70,000 by year 13 of the deal. This figure is much lower than the 215,000 tons per year that the U.S. delegation had demanded leading up to this summer’s negotiations.

Imports of Australian rice will be allowed to rise 6,000 tons a year in the initial phase and as much as 8,400 tons by the deal’s 13th year. Japan will also create a non-tariff import quota for 78,400 tons of rice and a low-tariff quota for milk powder and butter equivalent to 70,000 tons of raw milk.

For beef, Japan’s current tariff rate of 38.5 percent will drop to 9 percent by year 16 of the deal, while those on pork will drop from 482 yen per kilogram to 50 yen per kilo as well.

From the consumer perspective, these changes are significant. Japan depends on imports for 60 percent of what they eat, and consumers will see lower costs at the grocery store as a result of this deal.

Although Japan made these concessions, it maintained the ability to protect its beef and rice markets in the following ways:

Despite these allowances, Japan’s rice farmers are still worried about the impact of foreign rice. Farmers I spoke with this summer during some field work, for example, expressed deep reservation over the agreement.

In Joge, a small community near Osaka where many young people have left, houses and land are abandoned. Mr. Mizukami, who is a lifelong resident there, works several small plots of land and told me that the “TPP deal is an important story, farmers like me feel the consequences directly, I’m afraid the farming lifestyle is becoming rare and will disappear.”

Farmers in Japan’s largest national organization, JA Zenchu, maintain concern about the impact that imported rice from the United States and other TPP countries will have on Japan’s most important traditional crop. Japan’s domestic rice production is already threatened by decreasing demand; the addition of foreign competition may be an additional pressure that this long-upheld traditional lifestyle will be unable to bear. The efforts of young entrepreneurial farmers are at the beginning stages in rural communities like Mr. Mizukami’s. The foreign competition from the TPP comes at an especially difficult time in the story of Japan’s rural rice-growing lifestyle.

For his part, Prime Minister Abe has stressed his willingness to lower or eliminate some tariffs, essentially ignoring domestic opposition and trying to appeal to Japan’s most important ally, the United States, while knowing full well that he can always bring them back if necessary.

But that may not be enough for farmers and consumer groups, who are not staying quiet. There was a protest this week in front of the prime minister’s residence in Tokyo, and marches against the TPP have taken place throughout the summer months leading up to the meeting in Atlanta.

Japanese who value local control of their food supply are also dismayed by the potential introduction of more genetically modified organisms. Japan currently cultivates no GMO crops, but the TPP will bring corporate ownership of agricultural land and the inability of government to restrict the use of GMOs. Japan imports many genetically modified foods, but consumers groups, like the Consumers Union of Japan (CUJ), are against any increase in GMO use because of the threat to biodiversity.

The CUJ and PARC, a nonprofit organization committed in international social and economic justice, fear that the TPP and its rules for investment and copyright will open the country to GMO beef and rice from the United States (even though the pact doesn’t mention them specifically).

Consumers and farmers should have plenty of time to voice their concerns, as the public text of the TPP will be released in several weeks. Some parts will remain secret, part of the reason for continuing discontent, and the agreement still has a long way to go before it enters into force.

Besides Japan, farmers in the United States and Mexico opposed to the lifting of tariffs and the potential impact on their livelihoods remain stumbling blocks. Japan’s Liberal Democratic Party (LDP) wanted to fast-track passage of the deal, but it’s doubtful given the legislative schedule of Parliament and the U.S. Congress. The LDP is unlikely to act until President Barack Obama signs the deal, which won’t happen until Congress passes it (and opposition to it is brewing among the presidential candidates).

If there’s a significant delay, the debate could spill into next summer, when Japan’s upper house holds elections. The opposition will likely try to delay TPP passage and make it a campaign issue in the elections. The LDP may try to alter the lower house’s schedule and convene a special session in advance of budget meetings that begin in April in order to ratify it.

But this is unlikely; at the earliest, Japan’s legislature won’t ratify the TPP until next summer or autumn. And that gives Japan’s disgruntled farmers of sacred rice, beef, and pork plenty of time to mobilize to try to stop it.

Nicole L. Freiner is an associate professor of political science at Bryant University. This article was previously published on TheConversation.com