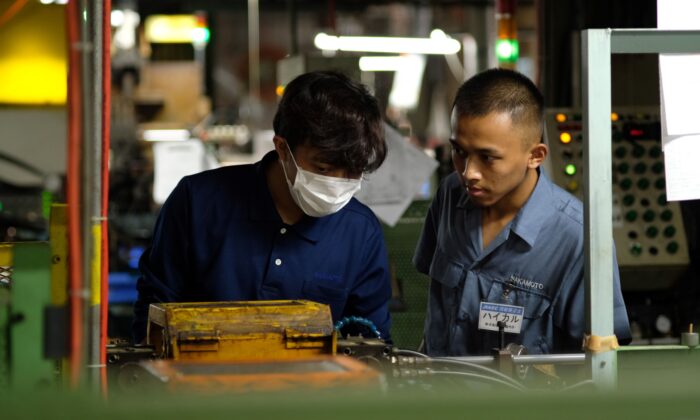 Japan has some of the most restrictive immigration laws in the world but it’s looking to make it easier for local companies to bring in talented foreign workers to some of its less populated regions by offering a fast-track path to permanent residency.

According to Nikkei Asia, the Japanese government will revise a point-based system that grades individuals based on annual income, educational background, and job experience, where those with high scores receive preferential treatment.

With the revision, the government will add points for working at companies promoted by local communities, especially in regions outside the metropolitan areas. The newly revised program is on a trial basis in Hiroshima Prefecture and Kitakyushu, two of the less populated regions in Japan, with plans to roll out the system nationwide.

The move is widely recognized as the government’s effort to solve an acute labor shortage in less populated regions, given its dwindling and aging population. As a country long closed to immigrants, pressure has mounted to open up its borders.

The standard requirement for permanent residency is to have lived in Japan consecutively for 10 years, but since April 2017, changes to the rule would allow applicants who receive 70 points to qualify for the “highly specialized profession” status, allowing them to apply for permanent residency after three years of residing in Japan instead of 10.

However, the revised point-based program will give 10 additional points to foreign individuals working in local companies outside the metropolitan areas while treating them the same as having an annual income of 10 million yen or more as a manager.

If the applicant receives 80 points, only one year stay period will be required to apply for permanent residency. Additionally, it will also allow them to bring along parents and domestic servants, while their spouses will also be permitted to work in the country.

According to the report, the number of workers certified as highly specialized reached 31,451 at the end of 2021. And despite the COVID-19 pandemic, the number has continued to rise.

Among the certified highly-specialized individuals, about 70 percent were Chinese, 6 percent were Indians, and 5 percent were Americans, according to numbers reported at the end of 2020.

In recent years, Japan has provided many incentives for its companies operating in China to shift production back home or into Southeast Asia in a bid to cut reliance on Chinese manufacturing and build resilient supply chains.

In 2020, the Japanese government generously provided 70 billion yen (about $653 million at the time) in subsidies for 87 companies to withdraw their production lines from China and shift their manufacturing back home or to Southeast Asia, Nikki Asia reported.

Among the 87 Japanese companies, 57 said they would return to Japan, and the other 30 would go to Southeast Asia.

Kiyoshi Imamura, former managing executive officer of Tokyo Steel, told local news in May that the rapid depreciation of the yen, disruptions in global supply chains, geopolitical risks, and wage changes are all factors that are driving Japanese companies back home.

According to Japan’s twice-yearly World Economic Trends report released in February, the country’s imports from China in 2019 accounted for 23.3 percent of its total, compared with the United States’ 18.1 percent.

Out of the 5,000 or so items examined, China accounted for more than a 50 percent share (calculated by value) in 1,133 categories of Japan’s imported goods, compared to the U.S.’s 11.9 percent share in 590 categories, the analysis showed.

The analysis said that Japan’s reliance on China was about twice the U.S.’s dependence on China while noting the heightened risks posed by Chinese supply chain disruptions.

Japan’s reliance on Chinese imports extends across various goods but is most pronounced in household electronics such as personal smartphones, tablets, and laptops. China’s share of electronic handsets imported by Japan rose to 85.7 percent in 2019 from 69.1 percent in 2009, and the country gets nearly all its imported tablets and laptops, 98.8 percent, from China, according to a Nikkei Asia report.

However, the makeup of China’s exports has shifted as the country’s economy grew and labor costs rose. While its share of Japanese imports of electronic devices and semiconductors has risen, labor-intensive products have shifted to Vietnam, Indonesia, and other Southeast Asian countries.

Japan-based current affairs commentator, Hajime Takamine, told The Epoch Times that significantly more Vietnam-made products had been seen in major Japanese malls in recent years. And that many processing plants have either moved back to Japan or to Vietnam and other countries due to the pandemic and increased labor costs, especially those related to footwear.

While the Japanese analysis showed the country’s overall dependence on Chinese imports had changed little from a decade earlier, Japan has worked hard in recent years to decouple from China.

In May, Japan’s parliament passed an economic security bill to reinforce critical supply chains, ensure core infrastructure security, enhance research and development, and tighten information disclosure on patents. The measures in the legislation were primarily aimed at China, such as cutting reliance on Chinese imports and safeguarding critical technologies, given China’s history of stealing intellectual properties.