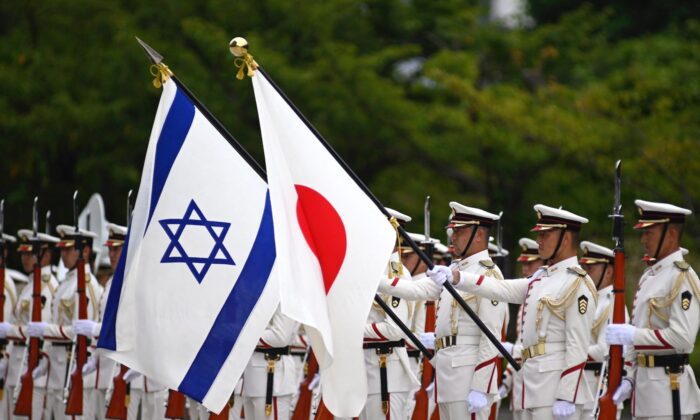 Japan and Israel signed a bilateral defense memorandum on Aug. 30 to bolster cooperation in technology and information sharing amid growing concerns over regional instability.

The agreement was made during a meeting between Japanese Defense Minister Yasukazu Hamada and his Israeli counterpart, Benny Gantz, in Tokyo, according to Japan’s Defense Ministry.

Hamada expressed Japan’s strong opposition to any unilateral attempt to change the status quo by force, citing concerns over the Russia–Ukraine war and rising tensions in the East and South China seas.

He told Gantz that Japan’s efforts to uphold a “free and open Indo-Pacific” would contribute to the development of the Middle East. The two ministers reaffirmed their cooperation to promote regional peace and stability.

Japan didn’t elaborate on the agreement’s details, but Gantz said it will allow the exchange of technology and information between the two countries. He also met with Japan’s foreign affairs minister during his two-day visit.

I was honored to be hosted by my Japanese counterpart, Minister Hamada at the @ModJapan_en. We signed a Memorandum of Defense Cooperation, which will enable Japan and Israel to expand defense ties in the defense equipment, technology and military arenas. pic.twitter.com/PhFpYn7oMy

“Israel and Japan celebrate 70 years of diplomatic relations this year and we will work to strengthen and deepen security cooperation,” Gantz wrote on Twitter.

Japan has increased its military cooperation with its allies in the Indo-Pacific region and engaged in multinational drills, including the U.S.-led live-fire drill—Super Garuda Shield exercise—in Indonesia on Aug. 12 involving 14 nations.

“Combined with a lack of transparency of its national defense policies and military forces, recent military activities by China have become a strong concern for our nation, the region, and the international community,” Hamada said on Aug. 10, Kyodo News reported.

Raven Wu contributed to this report.