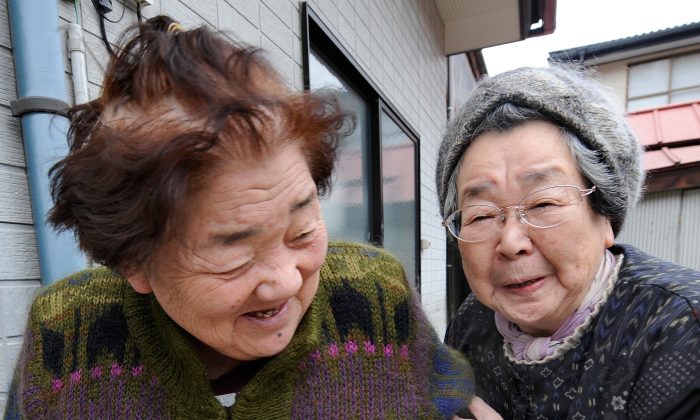 Two elderly survivors and friends smile as they are reunited 10 days after the massive 9.0 earthquake and tsunami in Ishinomaki, Miyagi Prefecture, on March 21, 2011. (Toru Yamanaka/AFP/Getty Images)
Opinion

Japan Is Not the Only Country Worrying About Population Decline

Get used to a two-speed world

The past century has been one of unprecedented global population growth. While the number of people in the world doubled from 0.8 to 1.6 billion between 1750 and 1900, the 20th century saw a near quadrupling to 6.1 billion. In the past 15 years alone, more than 1.2 billion have been added to that. Worries about “overpopulation” can be seen everywhere from the U.K. to Sub-Saharan Africa.

So it may have been a surprise to some to see Japan, the world’s third largest economy, posting the first population decline since 1920, falling 0.7 percent from five years earlier. A persistently low birth rate is the main reason.

Japan has been worrying for a while now about whether its population may one day become extinct. In 2006, the Japanese National Institute of Population and Social Security Research predicted that by the end of the present century, population would decline to around 50 million, falling further to 10 million by the end of the next.

By 2350 just 1 million would be left and by the year 3000 just 62 people would be rattling around the Land of the Rising Sun. (Perhaps by then we would be living underwater.)

Neither current nor projected population decline is unique to Japan. Many East Asian societies are forecast to encounter rapid decline over the coming centuries. A similar exercise to that of Japan was published in South Korea, with the rather more generous assumption of 10,000 Koreans left by 2503.

Neither is the narrative of population decline unique to Asia. Current population decline in some Eastern European countries, such as Bulgaria, has resulted from both low fertility and high rates of emigration. And the projected demographic travails of Germany—which has one of Europes’ lowest fertility rates—have even been cited as a reason for Chancellor Angela Merkel’s approach to the refugee crisis.

So how worried should we be about this? Classical approaches to demography and economics, which see population size as critical to GDP growth, would suggest we should be very concerned. This is multiplied by the link to population ageing. This is often referred to as a “timebomb” in terms of its effects on both economic growth and the sustainability of social security and health and social care systems.

Recently, however, demographers have tried to move the discussion on from concern about over- or under-population. Instead, they have focused on the raw number of people as just one variable in either economic growth or sustainability, which is multiplied by lifestyle, education, savings, and so on.

In this view, the total quantity of people is less important than their quality (defined by, for example, education or health). Not only can this mean that population decline can be weathered by increased labor (and capital) productivity, but the “timebomb” of population ageing can also, to a degree, be diffused.

A Nation at Risk—How Gifted, Low-Income Kids Are Left Behind

So, if this the case, why are governments like Japan and Korea so worried about population decline?

Population decline can, to a degree, be seen as a sense of national weakness: a lack of “vitality.” These nationalistic sentiments can link into discussions not only of the strength of a culture, but can also have consequences for (the perception of) national defense. It is perhaps no surprise that the South Korean “extinction” forecasts were commissioned by a right-wing politician. In Taiwan, low birth rates were referred to by the previous president as a “national security concern.”

Its possible that these extinction forecasts do not represent a real concern at all, but are just another tool used by the state to urge citizens into reproducing.

On a much more local level of abstraction, however, we need to look at where depopulation is occurring the most. In Japan, the capital Tokyo is actually growing rapidly. Yet in Japan, as elsewhere in East Asia, rural depopulation is occurring on a tremendous scale—driven by both low fertility and migration to towns and cities. A recent book called “Local Extinctions” on this topic became a bestseller in Japan. In China, some villages are almost uniquely composed of the elderly.

The consequences of this for the economic and social prospects of rural areas are clear. To take one specific example, we can look at an article which received far less press than the Japanese population decline story, but is just as apt. Over the last two years, two colleges in Pingtung County at the southern tip of Taiwan have closed down. While there may have been other reasons at play, the local media explicitly state that this is “due to the nation’s dwindling student population,” which in turn is ascribed to the low birth rate.

What we see here in Pingtung County is a reflection of the dramatic changes which are forecast to occur among youth populations around the world over the next 50 years.

As the chart below shows, which I presented at the recent UUK International Higher Education Forum, the world is roughly split into two—between countries where the population aged 15–19 will increase (almost threefold in the case of Niger) and where it will decrease.

Some examples of youth population decline from 2015 to 2050 include Taiwan (-46 percent), Thailand (-38 percent), Poland and South Korea (both -31 percent), Brazil (-22 percent) and China (-21 percent). As education systems are still growing in many of these countries, it would be wrong to translate these figures into inevitable school and college closures. But it might suggest that through the basic principles of supply and demand, quality in education—especially higher education—could potentially increase as students become more discerning. This would then have impacts of total numbers of institutions.

Protests swept Egypt in 2011 as part of the Arab Spring.

Meanwhile, the tremendous growth in the youth population elsewhere (primarily in Sub-Saharan Africa and the Middle East) has raised concerns well beyond those about “overpopulation.” These include worries over outward migration, exploitation of land and resources, and unrest due to a so-called “youth bulge.”

To me it is clear that realizing the potential of both this dwindling and booming young population will be the key to truly determining whether rapid population decline or growth will have a negative effect on either local, national, or global societies. Improved, relevant education, and skills alongside access to decent employment and a strong political voice are the key priorities for this.

Stuart Gietel-Basten is an associate professor of social policy at the University of Oxford in the U.K. This article was originally published on The Conversation.