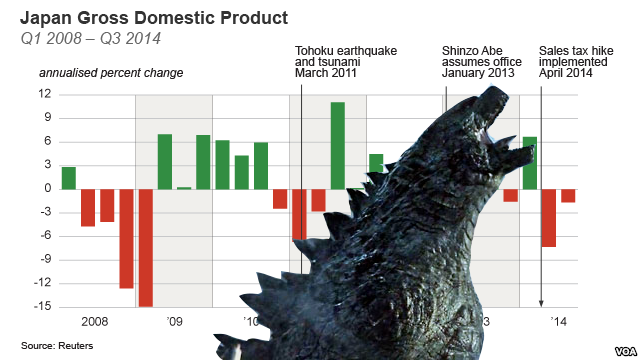 What people see when they look at recent GDP data (Source: Reuters/VOA).
News

Japan is in “recession,” but there is no need to freak out

For the second quarter in a row, Japan’s Gross Domestic Product (GDP) shrank, putting the country into a technical recession. With GDP expected to grow an annualized 2 percent between July and September, the 1.6 percent contraction came as a surprise. The consumption tax hike in April has lowered consumer spending, causing the economy to falter the last two quarters.

All of this recent news has made some people pretty pessimistic about the state of Japan’s economy and Abenomics, but things aren’t as bad as they seem.

Don’t get me wrong — Japan sinking into a recession isn’t good. It was a miscalculation by the Abe administration that could unravel their entire economic growth program. But there are signs that the Japanese economy will be able to quickly recover from speed bump.

The Japanese government knew that the 3rd quarter GDP numbers weren’t looking hot, and already took measures to boost growth in the 4th quarter. At the end of October, the Bank of Japan (BOJ) decided to substantially ramp up its quantitative easing program, while the Government Pension Investment Fund announced that it would double its holdings of foreign stocks. BOJ Governor Haruhiko Kuroda is determined to hit the 2 percent rate of inflation, and Abe and his allies has stressed that beating deflation is an essential piece of the government’s growth strategy.

It is also definite that Abe will postpone the October 2015 consumption tax hike, which will buoy the economy for the remainder of the year. He is currently postponing the hike until April 2017, but since he appears to be pretty open to delaying the increase until the economy has recovered, he might delay it even further or indefinitely. With the tax hike out of the picture in 2015, Japan’s growth estimates are going to look a lot rosier.

Plus, according to Finance Minister Akira Amari, the government may also implement some good old fashioned stimulus spending. Markets are already responding to the possibility of Japanese stimulus measures.

Recent figures show that the Japanese economy could already be heading towards a recovery, as retail sales and machinery orders are both on the rise. These illustrate that people are spending and manufacturers are preparing for a rise in demand — both of which are solid signs of incoming growth.

With steps already being taken by the Abe administration, along with some upbeat figures, there are some economists who think that Japan will jump out of the recession by the end of the year. Tomo Kinoshita, an economist at Nomura Securities, believes that the economy is gradually improving and that there is “no reason to be pessimistic about the economy going forward.”

The tax hike hit the economy harder than the government may have thought it would, but that doesn’t mean Abenomics is and down and out. As long as 4th quarter growth shows a strong rebound, then all is not lost for Abe’s growth strategy. Now let’s hope Abe has a plan for implementing necessary structural reforms — aka arrow numero 3.