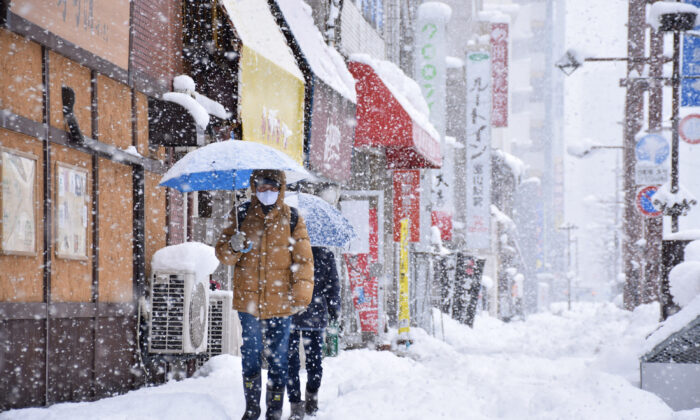 People walk along a street in heavy snow in Toyama, Japan, brought by an extreme cold front along western and northern parts of the country on Dec. 27, 2021. (JIJI Press/AFP via Getty Images)
Asia & Pacific

Japan canceled more than 100 domestic flights on Dec. 26 due to heavy snow in the northern and western parts of the country, which the country’s meteorological agency has forecasted will persist until Dec. 28.

In a Dec. 24 statement, the Japan Meteorological Agency warned of a strong cold air mass flowing into Japan from Dec. 25 to Dec. 28, forecasting heavy snow in areas in northern and western Japan along the coast of the Sea of Japan.

The heavy snowfall led to more than 100 domestic flights in Japan being canceled on Dec. 26. ANA Holdings’ Operations Director Hiroaki Hayakawa said the airline was forced to halt 79 flights as of 4 p.m. on Dec. 26, which affected about 5,100 passengers.

Japan Airlines also canceled 49 flights as of 4 p.m. on Dec. 26 due to heavy snowfall, which affected about 2,460 passengers.

Authorities have advised people to refrain from going outside and have closed traffic in wide areas until the situation improves. The agency also urged drivers to install winter tires and carry chains; it noted that in the past, many large vehicles were stuck on the roads due to heavy snowfall.

“In areas where heavy snowfall is expected, even public transportation can be subject to large-scale, long-term delays and suspensions,” it stated, urging people to be aware of weather and traffic updates.

Earlier in 2021, Japan reported a snowstorm that resulted in a 134-car pile-up on the Tohoku Expressway in Miyagi Prefecture on a stretch of road about half a mile long, killing one person and injuring a dozen others.

Authorities imposed a speed limit of 31 miles per hour when heavy snow had cut visibility, but that wasn’t enough to prevent the disaster. The disaster management agency said that about 200 people were caught up in the crashes, with 12 of them being sent to the hospital.