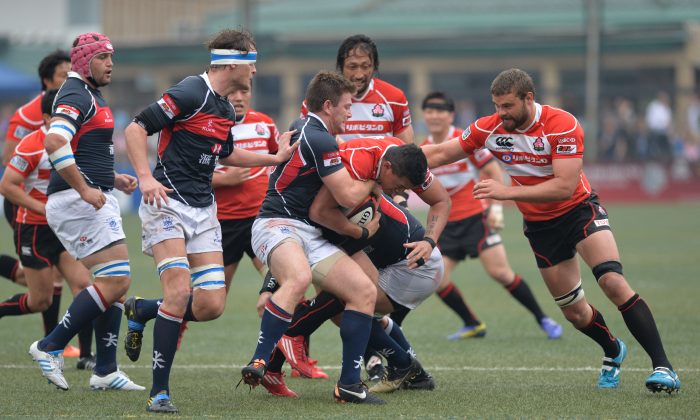 As anticipated, Japan and Korea both won their matches in Week-2 of the Asia Five Nations qualifying tournament.

Meanwhile, as a unified team, Hong Kong took a big step forward against Japan ahead of a crunch match that awaits them against Philippines in the coming week.

“We were expecting that.”

Jones, who coached the Australian Wallabies national team to the Final of the 2003 Rugby World Cup, was pleased with Japan’s performance, but admitted that his team was tired after a heavy week on the track.

“Two years ago, here in the second half, when Hong Kong beat Japan, the Japanese lost all their composure and lost the game. The good thing about today, it’s a new team, but they kept their composure, worked really hard. Physically they are probably at their tiredest this week because we had a really hard week training.

“Not that I am making excuses, but that is the reality of it. We weren’t sharp in our tactics and we missed a few opportunities. But I was very pleased with the attitude of the players.

“Nice and physical and toughed it out.”

Jones coached the ACT Brumbies to their first ever Super 12 title in 2001. With such international credentials as a coach, Hong Kong should take pride in praise from the Tasmanian, who acknowledged that Hong Kong as an amateur team up against professionals “played well”.

“We couldn’t take quick penalties; we couldn’t get the ball. And that is good coaching by Hong Kong.

“Those guys did really well Hong Kong and congratulations to them,” said Jones.

This fixture against the undisputed champions of Asia will be remembered as another highlight in the Hong Kong rugby year.

The week earlier Hong Kong had an impressive 53-7 win, when they hosted United Arab Emirates (UAE). Meanwhile a red hot record-setting Japan had hosted and defeated newcomers to the A5N Philippines 121-0.

Hong Kong did their homework on Japan and it paid off.

Played at the Hong Kong Football Club Rugby Stadium, spectators were fortunate to see high class play just a few yards away in front of them—and not from a distance of 100-plus metres in the bigger stadiums.

Although kept scoreless, Hong Kong did have their moments.

They did miss scoring from a penalty awarded in the first half. And, in try situations they also came close, but could not quite overcome the Japanese speed, strength, passing and strategic moves. However, they played to a much higher standard than in the previous week’s win against UAE—ball handling was much better and they were generally sharper all around.

After the match, Hong Kong Captain Tom McColl was pleased with the performance despite the loss.

“It was a pretty gutsy effort,” McColl said in the press conference.

“We knew Japan would come out and throw the ball around and have a real dig at us.

“We had to step up and defend for at least the first 20 minutes and hopefully we would still be in the game. Which we were. And then at half time we knew we were going to be challenged again.”

All things considered, to hold Japan to 14-0 up to half time was a solid defensive performance by Hong Kong.

When Hong Kong did get close to scoring, Japan were quick to retake the initiative. Balls were kicked by the Japan scrum-half deep into the Hong Kong half to clear from potentially dangerous positions, giving the Japanese team time to regroup.

“From a player’s point of view, I was really happy with our execution in defence. There were a few things that we probably slipped off: a few tackles and didn’t really execute anything in attack,” explained McColl.

McColl expressed his pride in the team and what it meant to represent Hong Kong.

Leigh Jones, Hong Kong’s head coach, was full of praise for his team and put it simply.

“I’ve seen the group actually become autonomous as a group of players.”

Throughout the match, Hong Kong resolutely stuck to the task and were never overawed. They put up a good defence against strong resourceful opponents and, no doubt, this match has been a good learning experience for all of the team.

It showed Korea’s second placing in the competition last year (behind Japan) was not a flash in the pan and had real substance. The final score line of 75-10—with 10 tries including 4 by Kim Kwong-min—shows their class. Several of Korea’s players, who compete in the Japan league, showed good form.

Next week Japan play at home in Tokyo against Korea on Saturday May 4 as the tournament reaches the middle of its 5-week schedule.

This match will provide a further indication of the strength of the Korean team, individual player capabilities and Korean match tactics. This will be useful in formulating Hong Kong’s plan for their final match of the tournament on Saturday May 18.

Before that though, Hong Kong have another important match this weekend on May 4 against the Philippines at the Rizal Stadium in Manila.

This is a crunch match for both sides and one that Hong Kong must win to be sure of achieving their objective of remaining in the A5N to take part next year in the 2015 World Cup qualifying competition. Indications are that Hong Kong should have the edge but, with home crowd advantage, the match may not be quite that easy.

If Hong Kong slip-up this weekend, it will put a great deal of pressure on them to achieve a victory away in Korea, which might just be a step too far.