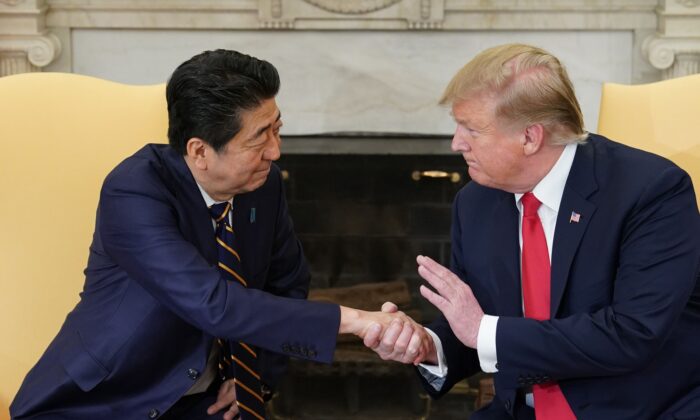 U.S. President Donald Trump and Japanese Prime Minister Shinzo Abe in the Oval Office of the White House in Washington on April 26, 2019. (MANDEL NGAN/AFP via Getty Images)
US News

Japan Faces Balancing Act in Relations With US, China

WASHINGTON—As the United States and Japan mark the 60th anniversary of the U.S.–Japan Treaty of Mutual Cooperation and Security, a leading critic of the Trump administration from Japan’s academic community said last week that U.S. President Donald Trump may be right to push Japan to pay its fair share for America’s military defense of the island nation.

Speaking at the Japanese Embassy’s Japan Information & Culture Center in Washington last week, Yuichi Hosoya said that the “stability of the Japan–U.S. alliance is one of the constants in the world.”

Hosoya, who is a professor of international politics at Keio University in Tokyo and a frequent commentator in U.S. and British media, says Japan has another reality it must face.

While the United States is Japan’s only ally by treaty, China is not only Japan’s close neighbor, but is also its biggest trading partner. Japan, therefore, has to strive to maintain good relationships with both, a balancing act often made difficult by the mercurial relationship between the United States and China.

Adding to the complexity of the relationship is that the United States, China, and Japan are the world’s three largest economies, respectively.

Japan, however, under the Trump administration’s new policies in Asia, now finds itself having to do for America what America no longer wishes to do for itself, Hosoya said. That, he said, is to help the United States maintain its role as the leading force for order and stability in Asia, at a time when the U.S. president “hates alliances and deep military engagements in the region.”

That’s a situation that could play right into China’s hands, he believes.

China’s budget for defense is four times greater than Japan’s, leaving Japan open to Chinese aggression should the United States reduce its role in Japan’s security, in particular, and Asian security overall.

Therefore, Japan, which had a leading role in creating the original “Free and Open Indo-Pacific” (FOIP) vision under Shinzo Abe when he first became prime minister in 2006, has since 2017 had to revamp the strategy into what can now be called FOIP 2.0.

The difference between the two is simple.

OBOR is Chinese leader Xi Jinping’s signature investment, infrastructure, and loan program to spread Chinese economic and political influence throughout Asia and the Eurasian continent, including the Middle East, Africa, and beyond.

The initiative is plagued by criticism from not only Western democratic countries, but from target countries themselves that have been the recipients of projects largely under Chinese management. Critics have largely focused on the debt to which poor countries commit, which can lead to nonperformance on loans, and ultimately, transfer of the underlying assets to Chinese control.

Therefore, Japan’s embrace of OBOR in its new strategy to manage the triangular relationship among China, Japan, and the United States is surprising.

Indeed, FOIP 2.0, as Hosoya describes it, may well be on its way to becoming obsolete.

Evidence shows that the United States isn’t reducing its profile and power footprint in Asia, but is instead actually increasing it.

As The Epoch Times reported last week, the U.S. Army is deploying a division-sized force to bolster its ability to respond quickly and efficiently in the Indo-Pacific region.

And the U.S. Navy, while not sufficiently supplied with the intelligence, surveillance, reconnaissance, and targeting resources it needs, has nonetheless increased its capabilities in the South China Sea and is being pressured to do more.

As the Japanese government has been trying to offer an “alternative idea in which the United States is the cornerstone of peace in the region,” Japan finds itself as a bridge between the United States and China, a role it doesn’t covet, Hosoya said.

In an unusual reference to wartime Japan, the professor also said that as U.S. seems to retreat from some of its international roles, it is “interesting that two former Axis powers, Japan and Germany, are trying to defend the world order that the United States created.”

Perhaps, he said, that is because both countries experienced an authoritarian regime, something the United States has not had.

Some years ago, China proposed what came to be known as a G-2 condominium, in which China and the United States would divide the Asia-Pacific region, if not the world, into two spheres of influence.

Not surprisingly, such an arrangement would leave Japan out of the equation.

China’s attitude toward Japan is further exposed by its frequent references to the 1943 Cairo Declaration, Hosoya said.

The Cairo Declaration came out of a pivotal meeting among British Prime Minister Winston Churchill, U.S. President Franklin D. Roosevelt, and Generalissimo Chiang Kai-shek from the Republic of China during World War II.

The declaration is unequivocal in its purpose:

“The three great Allies are fighting this war to restrain and punish the aggression of Japan.”

It tellingly goes on to say,

“It is their purpose that Japan shall be stripped of all the islands in the Pacific which she has seized or occupied since the beginning of the first World War in 1914, and that all the territories Japan has stolen from the Chinese, such as Manchuria, Formosa, and the Pescadores, shall be restored to the Republic of China.”

China uses the Cairo Declaration to support its claims to islands which Japan claims for itself, a perennial area of tension between the two nations.

Nonetheless, Japan will continue to support the United States, as well as China, in order to bolster peace and stability in the region, Hosoya said.

On the one hand, Japan has spent huge amounts of money to support American military bases in Japan. The United States should recognize that American national security is supported by its allies, and it would therefore be wrong to criticize those allies, Hosoya said.

But on the other hand, the professor said, underscoring the ambivalent relationship that Japan has right now with the United States, Trump is right in saying that Japan should pay its fair share for defense.

Ultimately, “we should more deeply understand what we have been doing,” Hosoya said. Trump is saying “some truth, and in the end, we have to support American global leadership.”

Meanwhile, the White House issued a statement Jan. 18 from Trump acknowledging the 60th anniversary of the mutual cooperation and security treaty between the United States and Japan. The president congratulated Japanese and American leaders, and Shinzo Abe, prime minister of Japan.

The president’s statement made a glancing reference to his desire to see Japan pay more toward its own defense.