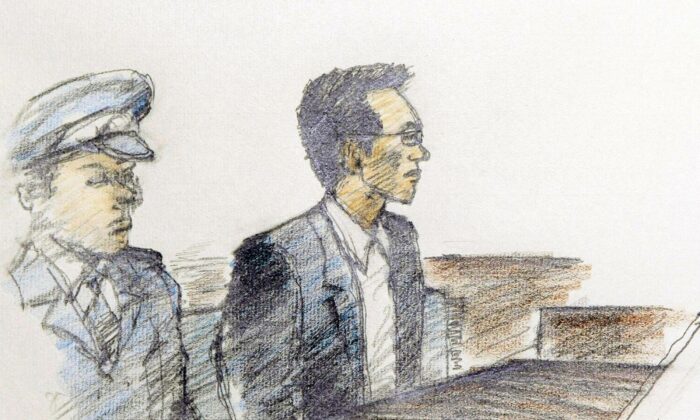 This illustration shows Tomohiro Kato (R), who killed seven people in a stabbing spree in Tokyo's neon-lit electronics district of Akihabara in 2008, sitting in the dock at the Tokyo District Court on March 24, 2011. (STR/AFP via Getty Images)
Asia & Pacific

Japan has executed a man convicted of killing seven people in a 2008 stabbing rampage, the Justice Ministry said on Tuesday, marking the country’s first execution since last December.

Tomohiro Kato, 39, plowed into pedestrians with a truck in a Tokyo commercial district on June 8, 2008, killing three people and wounding two. He later exited the truck and fatally stabbed four passersby and injured eight others.

Justice Minister Yoshihisa Furukawa said that Kato committed the crime in “a cruel manner” by killing seven people and injuring 10 others, demonstrating his “strong intent to murder” and “careful preparation.”

“The death sentence was finalized after sufficient trial in this case. Based on the above facts, as the justice minister, I ordered the execution of the death penalty after careful consideration,” Furukawa said in a statement.

Hideaki Nakagawa, director of Amnesty International of Japan, called the execution “a callous attack on the right to life” because it was conducted when Kato was pursuing a second retrial of his death sentence.

“Carrying out an execution during a request for retrial clearly violates international safeguards set out to protect the rights of those facing the death penalty,” Nakagawa said in a statement.

Nakagawa called on the Japanese government to implement a moratorium on executions and to commute all death sentences to jail terms.

Kato’s execution was Japan’s first this year and the second under the leadership of Prime Minister Fumio Kishida, who took office in October 2021. Japan executed three men in December last year.

In Japan, the death penalty is carried out by hanging.