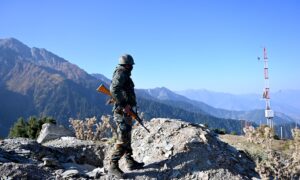 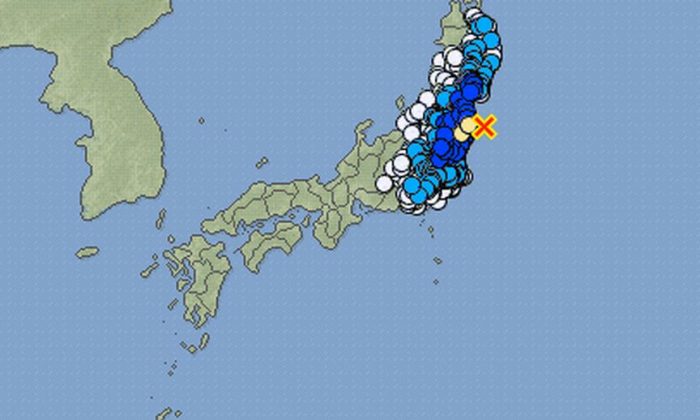 A moderate-strength earthquake struck off the coast of Fukushima Prefecture in Japan on Thursday. (JMA screenshot)
Asia & Pacific

A moderate-strength earthquake struck off the coast of Fukushima Prefecture in Japan on Thursday.

The quake hit at at 10:51am JST (Wednesday, 8:51pm EST), according to the Japan Meteorological Agency. The JMA said that the quake was a magnitude-5.3, which is a different scale than what the US uses.

The US Geological Survey has not yet issued a statement about the quake.

It’s unclear if any damage was done.

There was no tsunami warning issued after the temblor hit.

According to Reuters, TEPCO–the agency that oversees the crippled Fukushina Daiichi power plant that was damaged during the March 11 quake–said that the Thursday morning earthquake didn’t impact the plant.

TEPCO said there were no irregularities following the quake.

ATLANTA (AP) — The outgoing chair of the U.S. Nuclear Regulatory Commission said Tuesday the industry must finish making the safety changes required after a nuclear disaster in Japan, and it faces unresolved questions over how to store nuclear waste as existing plants close.

Allison Macfarlane became the agency’s leader in July 2012 after the stormy tenure of former chair Gregory Jaczko, whose management style was described as bullying by fellow commissioners and staffers. A geologist, Macfarlane will start teaching Jan. 1 at George Washington University.

Macfarlane said the agency must follow through on changes required after the March 2011 crisis at the Fukushima Dai-ichi nuclear plant in Japan. Tsunami waves disabled the plant’s electrical and cooling systems, causing a meltdown and explosions that flung debris and radiation into the environment.

“We as regulators need to do what we think is right,” Macfarlane said in an interview during a nuclear industry conference in Atlanta. “And if we think something is required, and this is something we’ve learned as a result of the Fukushima accident, we need to tell the industry to do it.”

Among the changes, the nuclear industry has set up centers in Memphis and Phoenix that can quickly send emergency gear to a stricken plant. Some plants will install vents meant to prevent explosions during extreme accidents. Regulators are reviewing updated earthquake and flooding hazard assessments for plants across the country.

Earlier this year, Macfarlane lost a vote on whether spent nuclear fuel should be removed more quickly from water-filled storage pools. After used nuclear fuel is removed from a reactor, it must be cooled in water for several years. By law, the U.S. government promised to dispose of that used fuel, but it never has. As a result, spent fuel continues to accumulate in pools.

Experts have long been concerned that accidental water loss in a cooling pool could cause the old fuel to overheat, potentially combust and release radiation. NRC staffers concluded the costs of placing that spent fuel in special casks on land outweighed the safety gains from removing it from the pools, and a majority of the NRC’s commissioners agreed. Macfarlane said the issue deserved more study.