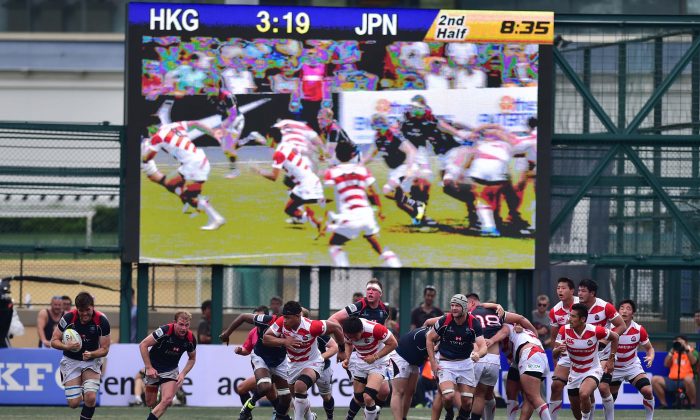 Dan Falvey of Hong Kong makes a break from their own 22 metre area minutes into the second half of their Asia Rugby Championship (top 3) second round match at Hong Kong Football Club on Saturday May 7, 2016. (Bill Cox/Epoch Times)
HK Rugby Union

HONG KONG—Japan comfortably beat Hong Kong 38-3 in the second round match of the 2016 Asian Rugby Championship, played at the Hong Kong Football Club on Saturday 7th May. It was Japan’s second victory. They beat South Korea 85-0 last week, and remain undefeated, their tryline intact, and only 3points blemish their perfect record: an encouraging start for coach, Ryuji Nakatake and his team, demonstrating the strength in-depth Japan possesses.

Hong Kong put up a spirited fight, made Japan work for their points and ensured the game went the distance. There was no ‘shipping of points’ in the final quarter, and the Hong Kong team look to be developing the fitness to sustain an 80 minute match at this level. Leigh Jones, the Hong Kong coach would have been pleased with the effort, but must wonder how to develop the skills to break the gainline, and turn pressure into points.

After twenty two minutes, Japan led 19-3. They had been in the Hong Kong 22, three times and scored each time. The first after 4 minutes, when they confidently opted for a lineout, instead of kicking an easy penalty, and the resulting forward-drive saw Japan flanker Shokei Kin over for a try, converted by flyhalf, Ryohei Yamanaka. The second try, on 11minutes, was a mark of individual excellence by scrumhalf Keisuke Uchida. He broke from 30 metres, shrugged-off the tackle, turned Hong Kong fullback Alex McQueen inside out, rounded two more players and touched down. The third try was well-worked along the Japan line, moving the ball fast, creating space for winger Kentaro Kodama to touch-down in the far corner. Yamanaka was successful with the conversion and Japan led 19-3.

For most of that time, Hong Kong had made headway in the Japan half, but only had a penalty, converted by Ben Rimene, to show for their effort. In terms of possession and territory it was even between the two sides, but the scoreboard stood in Japan’s favour 19-3. It would prove be the story of the match.

For the next 30 minutes of play, the rest of the first half and 15 minutes into the second half, Hong Kong kept Japan scoreless. Hong Kong pressured Japan at the line-out, contested the ball in the loose and defended well. Attacking opportunities were few, but a break by Hong Kong lock Adrian Griffiths and good support by winger Yiu Shing Kam, needed Japan to make a try-saving tackle. This was as close as Hong Kong would come to score.

The substitutes came on, and Hong Kong found fresh legs and more speed at the scrum from replacement scrumhalf Cado Lee, put some zip into their attack. There were a couple of barreling runs by substitute prop Leon Wei; and both Alex McQueen and Ryan Meacheam made brave attempts on the counter-attack. Despite Hong Kong’s effort it too often ended in another penalty offence or spilled ball.

At 75 minutes, Hong Kong had worked the ball into the Japan 22, lost it and Japan counter-attacked. In less than a minute, the ball went from inside the Japan 22, through skilled passing and interplay of the Japan players, all the way to the Hong Kong 5 metre line. Good resolute defence by Hong Kong, but turning defence into attack was a major difference between the two teams. Japans enterprise was rewarded with another forward-drive try for Yamamoto, and a final score of 38-3 to Japan.

Japan is the benchmark of rugby performance in Asia, and this match demonstrated not only their skills but the strength indepth being created these days. For Hong Kong, it was encouraging. They made Japan work hard for their points, and if Hong Kong can reduce the penalty count and create more line-breaks, they will start to contest better against top twenty world rugby teams.

Next week, in round three of the Asian Rugby Championship Hong Kong play South Korea in Incheon.