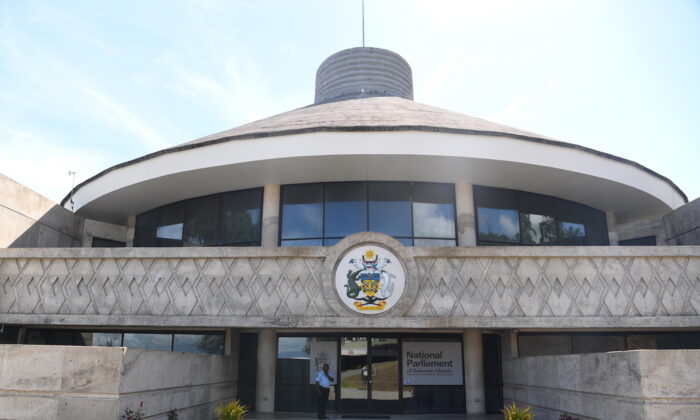 Japan dispatched a vice foreign minister to the Solomon Islands on Monday following the official signing of a security deal between the small Pacific nation and China, which Tokyo feared would undermine regional stability.

“We believe the deal could affect the security of the entire Asia-Pacific region, and we are watching the development with concern,” foreign minister Yoshimasa Hayashi told reporters on April 22.

The move comes on the heels of Australian Prime Minister Scott Morrison’s remarks on Sunday that a Chinese military base in the Solomon Islands will represent a “red line” for Australia, calling the Solomon Islands-China security pact a “shared concern” among governments.

“We are closely following what China does in the Pacific island region with interest,” Kishida said, Kyodo News reported. The two leaders also reaffirmed their commitments to achieving a free and open Indo-Pacific region.

On April 22, the United States warned the Solomon Islands government that Washington would “respond accordingly” if China was allowed to install a military base on the Pacific nation under the terms of the Solomon Islands–China security pact.

The White House stated that Solomon Islands Prime Minister Manasseh Sogavare had reassured that no military base, long-term presence, or power projection capability would be permitted under the agreement with China.

“The United States emphasized that it will follow developments closely in consultation with regional partners,” the White House said in a statement.

The official signing of a security agreement between the Solomon Islands and China last week triggered alarms in the United States and among its allies that Beijing would use the accord to establish a military presence in the region and destabilize the Indo-Pacific.

A leaked draft of the agreement states that Beijing would be entitled to dispatch police, troops, weapons, and even naval ships to the Solomon Islands—with the permission of the Solomons—to “protect the safety of Chinese personnel and major projects.”

Its security deal with China could potentially extend Beijing’s reach beyond the South China Sea to within 1,700 kilometers (1,060 miles) of Australia’s northern city of Cairns.

The strategically important Solomon Islands was a battleground during World War II.

Japan is especially concerned about China’s growing military presence in the East China Sea, which includes the Japanese-controlled Senkaku Islands. Beijing began asserting rights over the Senkaku Islands in the 1970s and called them Diayou Islands.