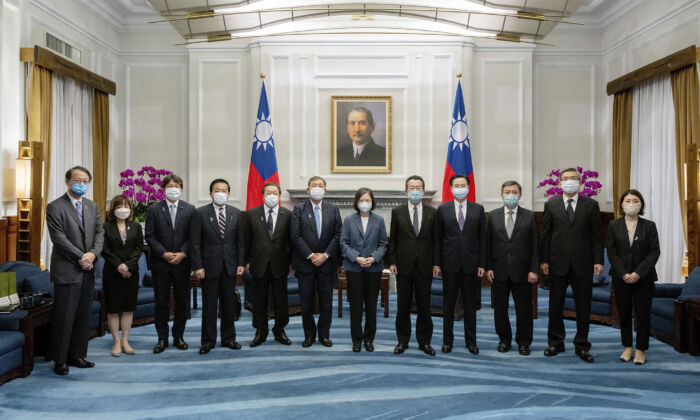 Taiwan's President Tsai Ing-wen (center) and Taiwanese officials pose for photos with a Japanese delegation at the Presidential office in Taipei, Taiwan on July 28, 2022. (Taiwan Presidential Office via AP)
Taiwan

Japan Discusses Preparations for Conflict in a Rare Visit to Taiwan

A high-level Japanese delegation visited Taiwan to discuss preparations for potential conflicts as the self-governed island is bearing increased military pressures from the communist regime in Beijing.

“We need to think ahead about what kind of situations could happen,” Shigeru Ishiba, lawmaker and former Japanese defense minister, said during a meeting with Taiwan President Tsai Ing-wen on July 28. “And after it happens, what kind of laws and agreements we should prepare, and what kind of armed forces we could employ to address the resulting issues.”

“We need to work together to reach consensus on this ahead of anything that could happen,” Ishiba said at the Presidential Office in Taipei.

Ishiba led the bipartisan delegation of Japanese lawmakers who arrived in Taiwan on July 27 for a four-day visit. The trip was focused on discussing regional security, which the Japanese lawmaker described as “rare.”

The trip came amid rising tensions across the Taiwan Strait as Beijing has ramped up military harassment around Taiwan by continuing to send warplanes to fly near the island on a regular basis for the past two years.

The Chinese regime views the self-ruled island roughly 100 miles off the mainland as its own territory to be taken by force, if necessary.

Following reports that Pelosi was planning a trip to Taiwan, the regime has threatened “forceful measures” against the United States and Taiwan.

The regime’s provocation also drew the attention of neighboring Japan, which devoted significant space of this year’s defense report to Taiwan.

Delighted to welcome former #Japan Minister of Defense @shigeruishiba & the members of the cross-party delegation to #Taiwan. Today we held productive discussions on regional security & how our countries can keep working together to ensure peace & stability in the Indo-Pacific. pic.twitter.com/pcakZRpMsR

The visit by Japanese lawmakers was welcomed by Tsai, who expressed hopes of bolstering ties with Japan to uphold regional security.

“Defending Taiwan is not just about defending our own sovereignty,” said Tsai. “In terms of regional strategic security, it is also about Taiwan’s position as a critical line of defense in the first island chain.”

The first island chain, situated east of mainland Asia, is a string of islands spanning the Japanese archipelago through Taiwan to Indonesia, access to which is vital for global supply lines.

“We will continue to deepen cooperation with Japan and other democratic partners in order to jointly maintain peace and stability in the Indo-Pacific,” said Tsai.

Ishiba was accompanied by former Defense Minister Yasukazu Hamada, and two other Japanese lawmakers, Akihisa Nakashima and Takayuki Shimizu, who are all members of a cross-party national security group.

Ishiba said Japan has a responsibility to the Indo-Pacific region to promote regional security, economic development, and the rule of law.

“It cannot just be at the level of thought, just words spoken out of one’s mouth,” he said. “Japan must take on concrete responsibilities in the Asia region.”