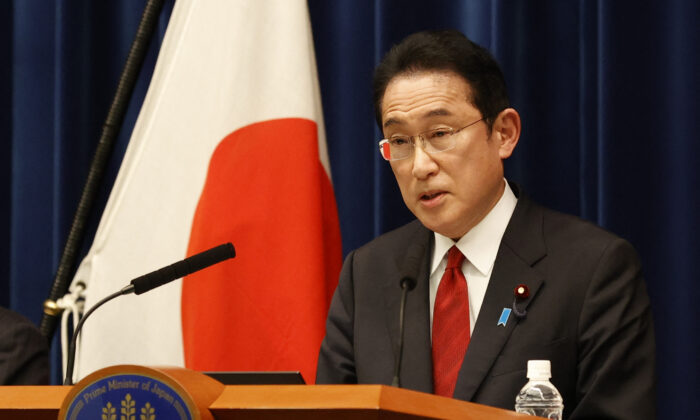 China fired 11 ballistic missiles into waters near Taiwan on Thursday, the same day that Pelosi arrived in Japan for the final leg of her Asian trip. Japan claimed that five missiles landed in its exclusive economic zone.

Kishida condemned China’s missile launches and reaffirmed Japan’s willingness to work closely with the United States to maintain stability in the Taiwan Strait.

“The recent [launches] of Chinese ballistic missiles into the waters near Japan, including the EEZ, is a serious issue affecting Japan’s national security and the safety of its citizens,” he was quoted as saying by the Foreign Ministry.

Pelosi said that her visit to Taiwan was not to change the status quo for the Chinese-claimed island but rather to maintain peace in the Taiwan Strait in accordance with the Taiwan Relations Act and U.S.-China policy.

“To that end, as you see, the Chinese made their strikes, probably using our visit as an excuse,” she told reporters in Tokyo.

Pelosi said the United States will not be swayed by China’s attempts to isolate Taiwan, which had barred the self-governed island from participating in the World Health Organization.

“They may try to keep Taiwan from visiting or participating in other places, but they will not isolate Taiwan by preventing us to travel there,” she remarked. “Our friendship with Taiwan is a strong one.”

Pelosi and her congressional delegation arrived in Tokyo on Thursday after visiting Singapore, Malaysia, Taiwan, and South Korea. Her visit has angered China, which views Taiwan as a renegade province that must be reunited with the mainland.

The day before Pelosi’s arrival in Taiwan, China flew four J-16 fighter jets into Taiwan’s southwest air defense identification zone (ADIZ). The intrusion was stepped up the day of her arrival when 21 Chinese military planes flew into the zone.

China also announced that it would conduct live-fire military drills in six zones around Taiwan from Aug. 4 to Aug. 7. The announcement was issued minutes after the plane carrying Pelosi and her congressional delegation landed in Taipei on Aug. 2.