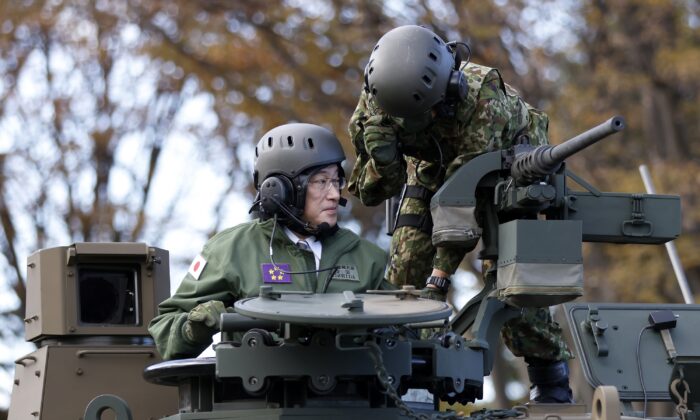 TOKYO—Japan’s Cabinet approved a record 5.4 trillion yen ($47 billion) defense budget for fiscal 2022 on Friday that includes funding for research and development of a new fighter jet and other “game-changing” weapons as Japan bolsters its defense capabilities in response to China’s growing military might and its tensions with Taiwan.

The 1.1 percent budget increase for the year beginning in April is the 10th consecutive defense spending increase and is in line with Japan’s pledge to the United States to strengthen its own defense capabilities to tackle increasingly challenging security issues in the region.

The budget, which still needs to be approved by parliament, includes a record 291 billion yen ($2.55 billion) for defense research and development, up 38 percent from the current year.

Of that, 100 billion yen ($870 million) is for development of the F-X fighter jet to replace Japan’s aging fleet of F-2 aircraft around 2035. It would be Japan’s first domestically developed fighter jet in 40 years.

Japan and Britain recently announced joint development of a future demonstration fighter jet engine and agreed to explore further combat air technologies and subsystems. The project includes Mitsubishi and IHI in Japan and Rolls-Royce and BAE Systems in the UK.

As China’s military buildup extends to cyberspace and outer space, Japan’s Defense Ministry is also pushing for research into artificial intelligence-operated autonomous vehicles for aerial and undersea use, supersonic flight, and other “game-changing” technologies.

The budget allocates 128 billion yen ($1.1 billion) for purchase of a dozen F-35 stealth fighters from Lockheed Martin Corp., including four with short takeoff and vertical landing capabilities for use on two helicopter carriers being converted into aircraft carriers, key to Japan’s joint operations with the United States in the defense of the Indo–Pacific region.

The Japanese and U.S. militaries have compiled a draft joint contingency preparedness plan for a possible Taiwan emergency, such as fighting between Chinese and Taiwanese forces, Kyodo news agency reported Thursday, citing unidentified Japanese government sources, amid rising tensions between Taiwan and China.

China claims self-governing Taiwan is its own territory, to be annexed by force if necessary. It has increased its military threats by holding exercises near the island and frequently sending warplanes into its air defense identification zone.

Under the reported plan, the U.S. Marine Corps. will set up temporary bases on islands in Japan’s Nansei chain between Kyushu and Taiwan for the deployment of troops in the early stages of a Taiwan emergency, while Japan’s military will provide logistical support as well as ammunition and fuel supplies, Kyodo said.

Japan and the United States are likely to agree to start drawing up an official preparedness plan at a meeting of their foreign and defense ministers expected in January, Kyodo said.

The plan, which also includes islands near Okinawa, the site of the bloodiest battle in World War II, is certain to face protests from local residents.

Defense Minister Nobuo Kishi refused to comment Friday on the report, saying only that Japan and the United Sates have action plans in case of emergencies and plan to update them, but that the details could not be disclosed. Kishi added that a decision by the Japan–U.S. committee in charge of negotiating the status of forces agreement between the nations would allow the U.S. military to open a new base on Japanese soil.

Japan’s defense spending now ranks among the top 10 in the world, according to international defense research organizations.