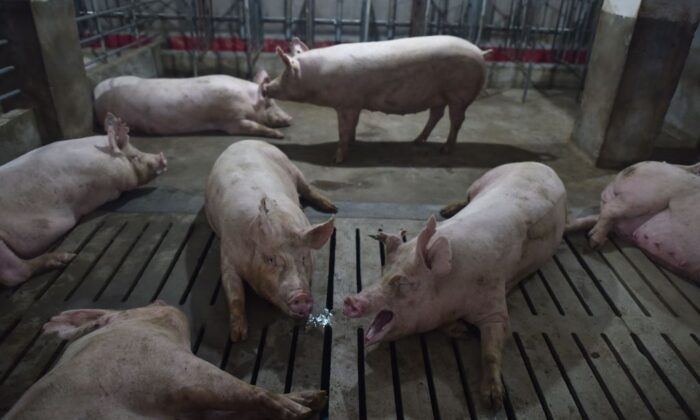 Pigs in a pen at a pig farm in Yiyang county, in central China's Henan province, on Aug. 10, 2018. (Greg Baker/AFP/Getty Images)
Chinese Regime

Japan authorities recently warned the country to be on high alert regarding the potential spread of African swine fever (ASF), a highly contagious disease that is lethal to pigs and wild boars but not dangerous to humans, according to local media.

Citing data from Japan’s Ministry of Agriculture, Forestry, and Fisheries, Kyodo News reported on Oct. 28 that there have been over 77 confirmed cases of African swine fever-infected pork products including sausage brought in by travelers from countries such as China, Vietnam, Cambodia, and the Philippines.

These pork products were confiscated from local airports around the country since October last year.

Japan is currently free from African swine fever, but at least 10 Asian countries have been hit with the disease, including China, Mongolia, Vietnam, Cambodia, the Philippines, Laos, Burma, North Korea, and South Korea.

ASF was not found on the Asian continent prior to an outbreak in China in August last year. ASF then began appearing in neighboring countries. However, none of these governments have publicly attributed their ASF outbreaks to the spreading of the virus from China.

Separate from ASF, Japanese pig farms are currently under threat of the classical swine fever. The two swine fevers are similar but caused by different viruses.

According to Japanese English-language daily newspaper Japan Times, pig farms in the central Japanese city of Gifu were first detected in September 2018 with the classical swine fever. Pigs and wild boars in 11 prefectures have since tested positive.

Japanese authorities have culled more than 145,000 pigs, and are also vaccinating pigs on a wide scale.

On the contrary, there is no effective vaccine against ASF.

As for Japan’s neighbor South Korea, which was hit with ASF in late August, local media Yonhap News Agency reported on Oct. 28 that there have been 15 confirmed cases of wild boars and 14 cases of pigs from local pig farms testing positive for the disease.

Additionally, Yonhap reported that while Korean authorities have yet to find out what has caused the disease outbreak, it suspected that it originated from North Korea, since all confirmed cases came from areas bordering North Korea.

More than 154,000 pigs have been culled in South Korea, as local authorities try to contain the outbreak, according to Yonhap.

Vietnam, which reported its first case of ASF in February, has culled more than 5 million pigs, or about 18 percent of its total pig herd, according to an Oct. 17 article by Reuters.

The disease has hit all 63 provinces and driven up the price of live pigs to around 60,000 dong ($2.58) per kilogram, an increase of 70 percent from earlier this year.

Dwindling local pork supply has forced Vietnam to import 10,802 tons of pork worth $21.3 million this year, an increase of 155 percent from a year ago, according to Vietnamese media, citing data from the customs department.

Among the pork imports, 52.5 percent originated from Brazil, followed by Poland with 13.8 percent, and the United States at 10.2 percent.

The Philippines is also batting an ASF outbreak. According to an Oct. 24 report by local media the Philippine Star, locals have culled more than 62,000 pigs since the beginning of the outbreak in August.