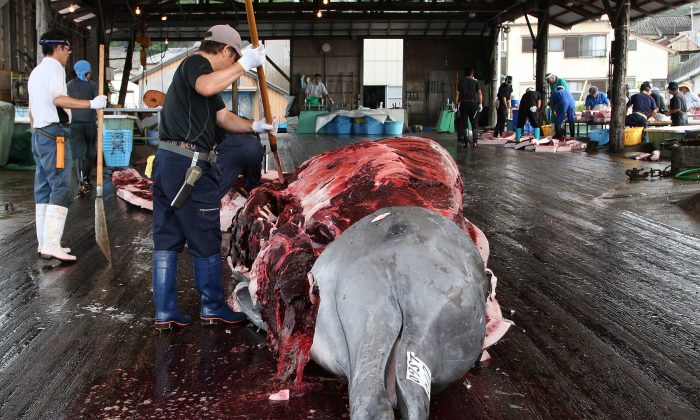 Japan Announces It Will Start Killing Whales Again, in Defiance of International Ruling

Japanese whaling ships are set to sail on December 1, defying a United Nations ruling that the country’s “research ships” are actually commercial hunts in violation of international regulations.

Japan stopped whaling for one year after the International Court of Justice ruled that the whaling programs didn’t qualify as scientific.

But the country’s Fisheries Agency said in a statement that whaling will resume and run from December until March 2017.

The government says the re-started program takes the court decision into account, and will capture about one-third of what it used to kill, or 333 Antarctic minke whales.

Four ships will be involved in the hunt, which will also include non-lethal research.

Japan says that while it is abiding by the court decision, its practices are sustainable and animal rights concerns are sentimental and irrelevant, in a document submitted to the International Whaling Commission, according to BBC.

Much of the whale meat produced from the research runs ends up in supermarkets and restaurants.

“Japan cannot unilaterally decide whether it has adequately addressed the scientific committee’s questions.”

Labor’s environment spokesman, Mark Butler, said that Australia’s concerns not being heeded properly by Japan reflected poorly on relations between the countries.

“Japan is a friend of Australia and the government should be taking every reasonable step to make Australia’s strong views on this matter known,” he said. “These whales are not being killed for scientific purposes and Japan’s activities should cease immediately.”

Japan began its so-called scientific whaling practices in 1987, a year after an international whaling moratorium took effect. The country’s officials have said many times that most whale species aren’t endangered, and noted eating whale is part of its culture.

Officials from other countries say research can be done without killing whales. “Non-lethal research techniques are the most effective and efficient method of studying all cetaceans,” Hunt said.

Japanese officials maintain the research is needed, though.

“As we seek to resume commercial whaling, it is crucial to get information as to whales’ migration, reproductive rates and the age pyramid of the population for setting catch quotas,” a fisheries official said, reported Phys.

Lethal whaling is necessary “to get this kind of essential information.”