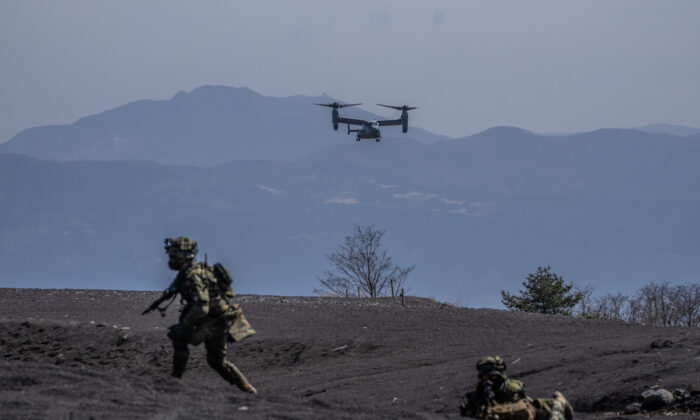 A U.S. Marine Corp Osprey comes in to land next to soldiers from Japans 1st Amphibious Rapid Deployment Brigade during an exercise with the U.S. 31st Marine Expeditionary Unit in Gotemba, Japan on March 15, 2022. (Carl Court/Getty Images)
Asia & Pacific

Japanese and U.S. Marines conducted their first airborne landing and combat drills together on Tuesday, indicating a deepening of military cooperation in the wake of increased military assertiveness by China and Russia.

The drills held near Mount Fuji were part of a three-week joint exercise, which involved about 400 troops from Japan’s Amphibious Rapid Development Brigade and 600 troops from the U.S. Marines based in Okinawa. Tilt-rotor Ospreys transported the brigade during the drills.

“We are committed to securing the peace and stability in the region through Japan-U.S. joint responses. Any potential adversary will see this as our actual capability, not just words,” Col. Masashi Hiraki, commander of Japan’s Amphibious Rapid Development Brigade, said.

Col. Michael Nakonieczny, a commanding officer of the 31st Marine Expeditionary Unit based in Okinawa, said that the troops are “operating across all domains to achieve the effects that are required to be successful” on the battlefield.

#Marines with the @31stMeu trained with members of the @JGSDF_pr during #MDX-ARDB. They conducted an air assault to strengthen ties between the forces. pic.twitter.com/SXXqvIpBnd

The drills came as Japan intensified its pressure on Beijing over its claims to vast swaths of the South China Sea.

China has built up its military presence in the South China Sea and made numerous incursions into the East China Sea, where the Senkaku Islands are located. Japan has mostly administered the Senkaku Islands since 1895, but Beijing began asserting its right over the islands in the 1970s and called them the Diaoyu Islands.

Russia’s maritime activity is likewise increasing, as is its cooperation with China.

Chief cabinet secretary Hirokazu Matsuno said that Japan’s government has communicated with Russia about the incident and is monitoring the situation closely.

“The Russian military has been carrying out extraordinary naval drills on a large scale in the Sea of Okhotsk and other areas since February in conjunction with Moscow’s invasion of Ukraine, and the six vessels are believed to have participated in the drills,” Matsuno said.

The incident happened less than a week after the military detected 10 Russian navy ships passing through the Tsugaru Strait, between Japan’s main island of Honshu and Hokkaido prefecture, on March 11.

Matsuno claimed that Russia also fired a land-to-air missile last week on the Russian-controlled Kuril islands, which Japan also claims. The dispute over the islands Moscow seized at the end of World War II has prevented the two countries from signing a peace treaty.

Japan’s defense minister Nobuo Kishi said last month that he would not rule out the option to conduct pre-emptive airstrikes on enemy bases if it falls “within the scope of self-defense,” although it would be the last resort to protect Japan from inbound missiles.

Kishi noted that certain conditions must be met in order for an airstrike against enemy bases to be authorized under the self-defense policy, which includes limiting the use of force to only what is necessary to complete the mission.