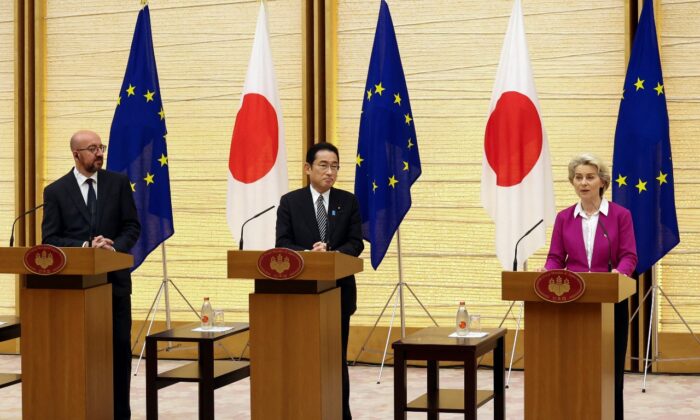 Leaders from Japan and the EU announced a new digital partnership on May 12 following a summit in which they discussed how to jointly contend with rising authoritarianism amid Russia’s invasion of Ukraine, nuclear saber rattling from North Korea, and increased aggression from China’s communist regime.

“Today we discussed the deepening strategic and economic partnership between the European Union and Japan,” Michel said. “We addressed our bilateral relations and important regional and global challenges, and how best to coordinate our responses.

“The EU and Japan are truly like-minded partners. Together we represent a quarter of global GDP. We have a deep and dynamic relationship, united by the fundamental values of democracy and rule of law. Japan is our closest strategic partner in the Indo-Pacific region.”

Michel noted Japan’s elevated relationship with the EU as the two have held an economic partnership since 2019, and Japan is the only Asian nation to date to appear in the EU’s strategy for bolstering European security and defense.

To that end, Michel recognized that Japan provided “significant humanitarian, financial and military support to Ukraine and its people,” following Russia’s invasion, and underscored the desire by Japan and the EU to build out that shared commitment and to expand dialogues on how to best handle the increasingly aggressive Chinese Communist Party (CCP).

“Our cooperation in Ukraine is critical in Europe, but it’s also important in the Indo-Pacific, and we also want to deepen our consultations on a more assertive China,” Michel said.

“We believe that China must stand up to defend the multilateral system that it has benefited from in developing its country.”

China’s Shadow Over the Indo-Pacific

The summit comes amid increased international pushback in response to a range of China’s activities. These include the CCP’s attempts to forcibly expand its territory through the creation of artificial islands, its stated commitment to unifying Taiwan with the mainland even by force, its ongoing repression of religious and ethnic minority groups, an extensive campaign of spying and intimidation, and its wide-reaching efforts to modernize and expand its nuclear arsenal.

Given that, von der Leyen referred to the Indo-Pacific as a “theater of tensions,” and said the EU would need to work more with partners like Japan to protect the peace and stability of the region.

“The European Union wants to take a more active role in the Indo-Pacific,” von der Leyen said. “We want to take more responsibility in a region that is so vital to our prosperity.”

Apart from Michel’s remarks, however, direct references to China were few at the summit.

But veiled discussion was apparent of the CCP’s threats against Taiwan as well as of the regime’s aggressive behavior and increased military drills in the East China Sea and South China Sea.

“We remain seriously concerned about the situation in the East China Sea, including in the waters surrounding the Senkaku islands and South China Sea, and strongly oppose any unilateral attempts to change the status quo and increase tensions that could undermine regional stability and the international rules-based order,” the leaders said in a joint statement.

“We express serious concern about reports of militarization, coercion, and intimidation in the South China Sea.

“We underscore the importance of peace and stability across the Taiwan Strait, and encourage the peaceful resolution of cross-Strait issues.

“We strongly oppose any unilateral attempt to change the status quo by force, regardless of the location, as a serious threat to the entire international order.”

To that end, the leaders announced that Japan and the EU would jointly work to expand practical cooperation in several domains, including maritime security, crisis management, cybersecurity, and countering disinformation.

Such efforts, Michel said, were vital to the continuation of a “free and open Indo-Pacific,” and to support the unity and centrality of the 10-member Association of Southeast Asian Nations (ASEAN). The comments may signal a further alignment with the United States, which on May 12 is hosting eight of the 10 national leaders of ASEAN in Washington as it attempts to sway the region away from increased ties with the CCP.

“We will enhance cooperation for a free and open Indo-Pacific, which is inclusive and based on the rule of law and democratic values, as well as unconstrained by coercion, based upon our respective, complementary strategies for the Indo-Pacific region,” the leaders said.

Such work, the leaders said, would be “grounded in common interests and the shared values of freedom, respect for human rights, democracy, the rule of law, open, free and fair trade, effective multilateralism and the rules-based international order.”

To achieve those ends, the leaders announced the adoption of a new digital partnership (pdf) that would increase Japan–EU collaboration on some of the largest security issues of the day.

The new Japan–EU Digital Partnership is the first of its kind between the EU and an outside country. It doesn’t create legal or fiscal obligations between the two governments but aims to jointly establish structures for collaboration across technological development, implementation, and policy.

Areas of focus include privacy, supply chain resiliency, access to semiconductors, 5G, AI, data flows, and the possibility of alignment regarding the regulation of blockchain technologies.

The partnership will expand upon the extant strategic and economic partnerships maintained by the EU and Japan, which, according to EU documents (pdf), already “constitute together the world’s largest area of safe data flows, allowing for the free and trusted flow of personal data.”

Its creation was guided by “the vision to create a genuine internal market for data, where data flows freely across sectors and countries,” according to the leaders.

The announcement follows warnings from several experts that Western-style democracies and authoritarian regimes were increasingly decoupling, breaking the world into distinct “technospheres” with their own norms, rules, and standards for technology.

The links between Europe and Asia appear to be growing, not receding, in the face of CCP threats, a point Kishida was quick to highlight.

“Security in Europe and in the Indo-Pacific are inseparable,” he said.