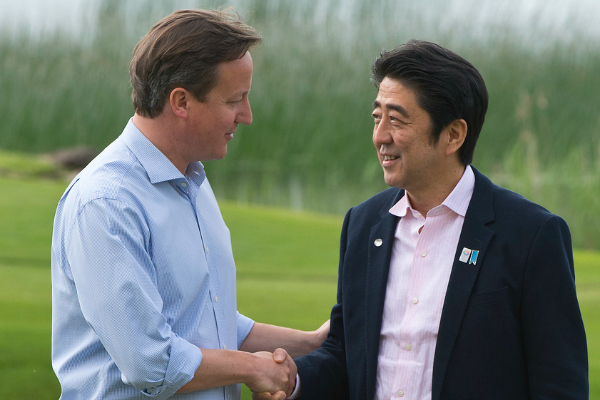 In a joint statement earlier today, Japanese Prime Minister Shinzo Abe and his British counterpart David Cameron agreed to boost bilateral security ties and agreed to pursue free trade negotiations between Japan and the European Union, among other topics. The two nations also recognized the challenge posed to the world by climate change, with the statement saying that the two countries will do all in their power to combat this urgent threat. The two leaders agreed that in order to stop climate change, they must work together to develop nuclear energy.

The Abe Administration is no foe of nuclear energy, despite the Japanese public’s sentiment toward the energy source. The new Basic Energy Plan approved by Abe’s cabinet on April 11 put nuclear power as one of the most important base-load sources of electricity. This new plan reverses the previous government’s plan to phase out nuclear power in the 2030s, which was established by former Prime Minister Noda.

Japan and the United Kingdom have had a long history of nuclear energy cooperation. Since the 1960s, the two countries have held annual bilateral Nuclear Dialogues, which helped build their tremendous relationship.

The two world leaders agreed that nuclear energy will be vital for lowering global emissions. The statement recognized that both countries believe that nuclear energy provides a consistent and affordable source of energy and will have a pivotal role in the future low-carbon energy mix.

Cameron welcomed investment from Japanese industry, such as Hitachi and Toshiba, in future nuclear plants in the UK. Horizon Nuclear Power, which is owned by Hitachi, plans to build a new nuclear plant in Wylfa and Oldbury. Abe’s visit even spurred Toshiba to ink an agreement today for a majority stake in a reactor at a new site in Sellafield.

But as Japanese companies invest in projects outside of their borders, the Abe Administration struggles to restart reactors of their own. The Sendai 1 and 2 reactors in Kagoshima Prefecture, which are fast-tracked for safety inspection, are expected to encounter delays that will delay inspections well into the third quarter of 2014. And before reactors will restart, the Nuclear Regulatory Authority will open a public comment period, which will attract unprecedented attention and likely lead to significant delays.

Cameron called the partnership over nuclear energy a “a symbol of the growing relationship between Britain and Japan.” But with two Japanese companies planning to build new plants in the UK, it appears that the relationship is lopsided. Although Abe struggles at home to restart reactors, he likely finds solace in the fact that Japan’s nuclear industry can still flourish.