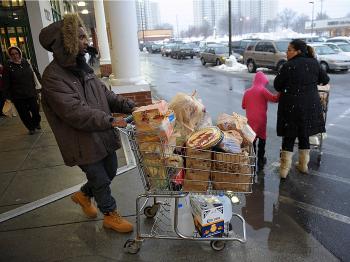 Antonio Perez
View profile
Follow
biggersmaller
Print
NEW YORK—Consumer spending got off to an auspicious start in 2010. Sales at U.S. retail stores were surprisingly higher in January, according to government data, suggesting that the economy recovery may be well under way.

"It is reassuring that retail sales continued to expand at the start of the year," said Commerce Secretary Gary Locke in a statement on Friday. Locke emphasized that while the numbers were promising, unemployment remains the top priority in order for the nation to emerge completely from the deepest recession in more than 50 years.

Experts believe that the U.S. economy is currently spearheaded by a recent buildup of inventory and factory production by businesses and that consumers, still stung by the 8.4 million jobs lost since the start of the recession, will be slow to recover.

Some experts warn that unless the employment picture gets rosier, we can forget about long-term growth.

"The tougher challenges, however, remain, starting with the labor market, which has yet to show convincing signs of recovery," James Picerno of The CapitalSpectator wrote in a recent column. "More generally, maintaining robust growth from here on out in everything from retail sales to industrial production promises to be a much bigger challenge than is typical in post-recession periods of recent decades."

Sales data released on Friday gave the U.S. dollar a boost against other currencies as investors shifted their worries to economies abroad, especially that of the Eurozone. The dollar climbed 0.5 percent versus the euro and 0.1 percent versus the British pound last Friday. It gained 0.3 percent against the Japanese yen.

Gain in the dollar was also helped by weak stock performance on Friday. The Dow Jones Industrial Average lost 45 points (0.45 percent) last Friday on concerns that China will limit bank loans and continued uncertainty over the Eurozone economy.

The Chinese communist government ordered its banks to raise capital reserves in an effort to curb lending and reduce runaway inflation that posed a threat to its economy. It was the second time this month banks were required to raise their reserves. The new reserve floor is now 16.5 percent for large lenders, and 14.5 percent for smaller lenders.