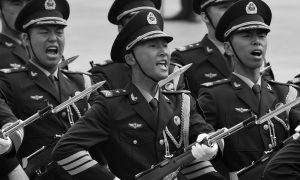 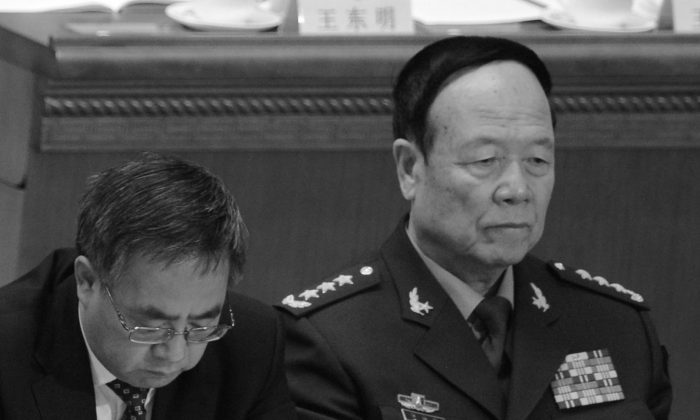 The Communist Party secretary of Guangdong province, Hu Chunhua (L), and Vice Chairman of the Central Military Commission Guo Boxiong. Guo may be the next target of the campaign against corruption in the military. (Goh Chai Hin/AFP/Getty Images)
China

Support for Chinese Communist Party head Xi Jinping’s anti-corruption campaign expressed by the military in mid-January may have signaled another round of purges of high-ranking military officers was coming.

From Jan. 13 to 19, the seven military regions in mainland China hosted Party conferences, at which support to the CCP general secretary Xi Jinping’s campaign against corruption in the military was proclaimed, according to state-run media People’s Daily. All military regions “agreed to be highly consistent” with Xi’s anti-corruption plan, the report says.

Mainland Chinese media say this is the first time in 35 years that such a consensus group statement in the military has been produced.

The joint statement followed immediately after China Military Online published on Jan. 15 a list of 16 generals who had been purged for corruption.

Analysts say the show of loyalty prepared the way for more top military leaders to be taken down.

Everyone in the military must show the proper attitude, and then all the local officials follow to express their loyalty
— Chen Hui, political commentator

“Everyone in the military must show the proper attitude, and then all the local officials follow to express their loyalty,” Chen added.

On Jan. 20, the mainland Chinese magazine Caixin published an article titled “More Big Tigers to Be Sacked in the Military in 2015?”, stating that another “big tiger,” a metaphor for a high-ranking official, is linked to the disgraced PLA general Gu Junshan, who has been purged.

This “big tiger” has a similar or even higher position than Xu Caihou, the report says. Xu Caihou, retired vice chairman of the CMC, was purged and his case referred for prosecution for bribery on June 30, 2014.

Speculation on who the “big tiger” is to be sacked focuses on the retired vice chairman of the Central Military Commission, Guo Boxiong.

A number of Guo’s close allies have been recently sacked or demoted during the anti-corruption campaign, showing a hint that the campaign may be getting closer to Guo.

On Jan. 15, China announced 16 military high officers had been sacked in 2014, including Guo’s former colleague and close ally Fan Changmi, the deputy political commissar of the Lanzhou Military Region. Guo’s former secretary Liu Zhigang, the former deputy commander of the Beijing Military Region, was demoted to serve in the Jinan Military Region recently.

Another two of Guo’s secretaries, Ma Chengxiao and Zhang Fuji who were serving as heads of the 31th Army and 47th Army were also recently transferred to Nanjing Military Region and Lanzhou Military Region to serve in positions without real power.