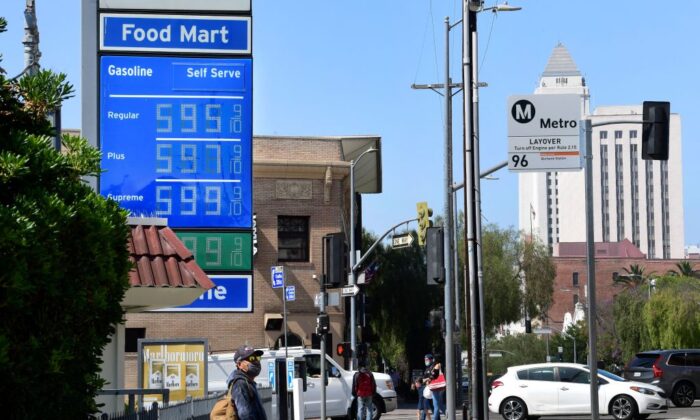 Some of the highest gas prices in town are posted on a signboard at a gas station in downtown Los Angeles on June 22, 2021. (Frederic J. Brown/file/AFP via Getty Images)
Inflation

January Inflation: What’s Up, What’s Down in the US Marketplace

On a monthly basis, inflation jumped at a higher-than-expected rate of 0.6 percent in January.

So, what cost more and what cost less in January?

The food index increased 7 percent to kick off 2022, with nearly every food item rising, except for frozen noncarbonated juices and drinks, which slid 0.2 percent.

Fish and seafood added 9.6 percent, while eggs and milk picked up 13.1 percent and 6.8 percent, respectively.

Fruits and vegetables rose 5.6 percent. Within this category, there was a 10.2 percent spike in oranges and a 6.8 percent rise in the price of apples. Lettuce soared 6.2 percent, but potatoes edged up just 0.1 percent, despite the spud shortages worldwide.

What about a cup of java? Coffee prices soared 8.6 percent, with roasted coffee climbing 9.3 percent and instant advancing 6 percent.

Filling up the Gas Tank

It was a more challenging time for American renters to keep a roof over their heads as shelter recorded a big bump to welcome 2022, rising 4.4 percent. However, tenants’ and household insurance tumbled 1.7 percent.

Everything Else in the US Marketplace

Higher prices are having an impact on household budgets. A recent International Council of Shopping Centers (ICSC) survey found 57 percent say inflation is causing financial hardship for their households, while 64 percent note that cost pressures are affecting their savings.

The same poll highlighted that 42 percent are reducing daily spending, 40 percent are cutting back on leisure and entertainment activities, and 32 percent are transitioning to cheaper generic brands.

While this is negatively affecting U.S. shoppers, small businesses are also feeling the pain of rising prices, says the National Federation of Independent Business (NFIB).

The NFIB Small Business Optimism Index fell 97.1 in January, with close to one-quarter (22 percent) of owners reporting inflation as their biggest problem.

Moreover, the net percent of owners increasing average selling prices rose to a net 61 percent, the highest figure since the fourth quarter of 1974.

The Federal Reserve and the Treasury Department forecast that inflation would remain hot for much of 2022, potentially easing in the second half of the year. But consumers do not believe it as the Fed Bank of New York’s monthly Survey of Consumer Expectations revealed that Americans think inflation will remain elevated at around 6 percent by the end of the year.

Will the U.S. central bank raising interest rates be enough to curb inflation?

“If rising the rates doesn’t bring inflation down, it could cause recession. Therefore, the Fed’s got to find the right balance, to be patient and to tighten gradually,” said Ipek Ozkardeskaya, a Senior Analyst at Swissquote, in a note.