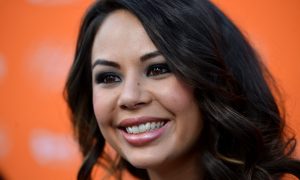 Janel Parrish and Val Chmerkovskiy were one of the top teams on Dancing With the Stars season 19, but they missed out on the Mirror Ball and got in third place.

Much of the attention placed on the team, though, throughout the season was about how they were or were not dating.

Several blogs have claimed that they were, while the couple themselves hedged most of the time but never confirmed they were, despite kissing multiple times on screen and holding hands off of it.

Janel’s boyfriend Payson Lewis also split with her during the season, adding fuel to the rumors.

Val on Tuesday night during the DWTS season finale said that he wants to get to know Janel better, perhaps before making it official.

“I’m going to miss dancing with Janel, but I’m finally going to get a chance to get to know her outside these crazy circumstances, so I’m excited,” Val said.

The comments came ahead of a tribute video Janel put together for her professional partner, in which she said that she’ll continue seeing him.

“Val, I really have grown to love you so much as a person. I’m going to miss you and I love dancing with you. I hate goodbyes but I’m not going to say goodbye to you because I know I’m going to see you again,” she said, crying. “I love you too,” Val mouthed to her after he saw the video.

“You were my trophy,” she added after they learned they got in third place.

Alfonso Ribeiro, the winner of this season, said that Janel and Val had an obvious connection.

“Janel’s strongest suite is the fact that she’s got a great connection with Val,” he said before he won. “Their chemistry based off real life comes to that dance floor, so it’s a hard one to beat.”