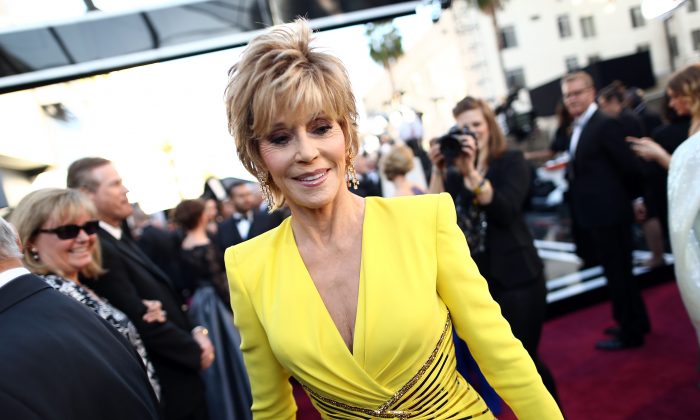 Jane Fonda arrives at the Oscars held at Hollywood & Highland Center on February 24. Her footprints and handprints will be placed next to her fathers in Hollywood. (Christopher Polk/Getty Images)
Entertainment

Jane Fonda Footprints to be Added to Hollywood Shrine

Jane Fonda footprints: Fonda will have handprints and footprints next to her father’s in the concrete shrine to celebrities outside Hollywood’s Chinese theater.

The event, along with a  special screening of a 1981 film Fonda made with her father, “On Golden Pond,” is part of this year’s TCM Classic Film Festival. The festival is taking place from April 25 through April 28 in Hollywood.

“We couldn’t be happier to be able to salute Jane Fonda at the TCM Classic Film Festival,” said TCM host Robert Osborne, according to the Examiner. “”She’s an extraordinary actress and a truly fascinating woman, and despite her two Academy Awards, too little has been said and written about her work as an actress and all those amazing, top-tier films she’s made.”

Fonda said in an interview that she’s very, very excited.

“I thought probably I would die and this would never happen,” she said.” I’m just really thrilled that it actually is happening and not only that, but I get to put my hand and footprints right next to my father. … I’m just so happy I’ll probably cry.”

Fonda, born in 1937, has 46 titles to her name, according to IMDB. She recently had a recurring role in “The Newsroom” television series, and plays Nancy Reagan in “The Butler,” slated to come out later this year.

The upcoming events honoring her inspired Fonda to reflect on her career, which hasn’t slowed since she returned to acting in 2005 after a 15-year hiatus.

After her guest-starring stint on “The Newsroom,” she’s more interested than ever in television.

“I’d love to have a television series of my own,” Fonda said. “I’m hoping that might happen.”