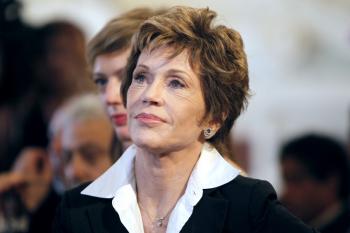 US actress Jane Fonda listens to Paris Mayor Bertrand Delanoe's speech before receiving the Vermeil Medal of the City of Paris on June 10, 2010 at the Paris City Hall. (Francois Guillot/AFP/Getty Images)
Entertainment

Shahrzad Noorbaloochi
View profile
Follow
biggersmaller
Print
Jane Fonda was awarded the Great Medal of the City of Paris, by Paris Mayor Bertrand Delanoe, in a ceremony at the Paris Cinema International Film Festival yesterday. The actress was praised for her contribution to Parisian art and culture.

"I feel so good in France, and especially in Paris, it feels like a second home," Jane Fonda, now 72, said according to multiple media reports.

She is currently is Paris filming a French film called “…Et Si On Vivait Tous Ensemble?” (“And If We All Lived Together?”).

“It has been 50 years since I made a film in French. Fortunately I have remained fluent, though on the days when I have several scenes with a lot of dialogue I will be tested, for sure,” she reports on her blog.

The award reception was accompanied with a warm exchange of friendly kisses and hugs between mayor Delanoe and Fonda.

Fonda is renowned for her strong voice and political activism. Some of her non-profits include the Jane Fonda Center at Emory University and the Women’s Media Center, which “makes women more visible and powerful in the media.”