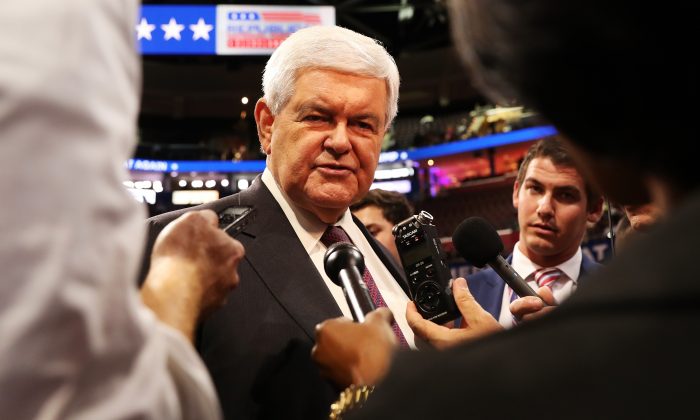 Former Speaker of the House Newt Gingrich (C) prior to the start of the fourth day of the Republican National Convention at the Quicken Loans Arena in Cleveland, Ohio, on July 21, 2016. (John Moore/Getty Images)
Jan. 6 Coverage

The Jan. 6 select committee asked former GOP House Speaker Newt Gingrich for a “voluntary” interview on his role in perpetuating the 2020 election fraud claims that had led to the U.S. Capital breach, according to a Thursday letter from the panel.

The exchanges allegedly unveiled his potential efforts to overturn the 2020 presidential election by providing Trump staff “detailed input into television advertisements” that repeated and relied upon what the committee called “false claims” of voter fraud, according to the letter.

“These advertising efforts were not designed to encourage voting for a particular candidate. Instead, these efforts attempted to cast doubt on the outcome of the election after voting had already taken place,” the committee argued, noting that the ads ran in the days leading up to the Dec. 14 meeting, where state electors would vote for president and vice president.

In an alleged email Gingrich sent to the Trump team on Dec. 8, 2020, responding to a proposed script for a television advertisement about election fraud, he suggested disclosing “new verifiable information” to the American public.

“If we inform the American people in a way they find convincing and it arouses their anger[,] they will then bring pressure on legislators and governors,” Gingrich wrote, according to the committee.

Thompson claimed in the letter that such information suggests the former House speaker “sought ways to expand the reach of this messaging” in a bid to influence public sentiment. “We would like to interview you about these and other communications and speak with you about your efforts to advise President Trump and his campaign,” he said.

The committee is looking to sit with Gingrich during the week of Sept. 19 for a “voluntary transcribed” discussion, according to the chairman.

In a late-night email Gingrich allegedly sent to former White House Chief of Staff Mark Meadows after the Capitol breach on Jan. 6, 2021, he asked whether there were “letters from state legislators about decertifying electors,” the Sept. 1 letter shows.

Gingrich told Politico on Thursday night that he had not received a letter yet and declined to comment.

The Epoch Times reached out to Gingrich for comment.

The Jan. 6 panel has formally subpoenaed House Minority Leader Kevin McCarthy (R-Calif.) and four other GOP lawmakers in its probe into the Jan. 6 incident, while members said later in June they were considering whether to compel former Vice President Mike Pence to testify.