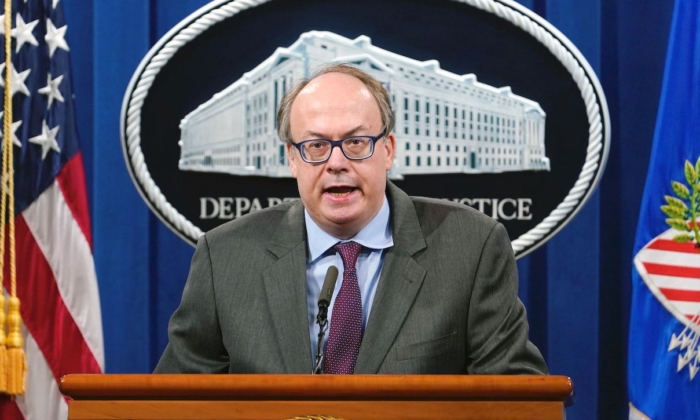 A file image of Jeff Clark, the then assistant attorney general for the Environment and Natural Resources Division, during a news conference at the Justice Department in Washington, Sept. 14, 2020. (Susan Walsh, Pool/AP Photo)
Politics

Clark had testified before the committee last month but was not cooperative, according to the committee’s chairman, Rep. Benny Thompson (D-Miss.)

The committee’s recommendation can now be considered by the Democrat-controlled U.S. House, which has already approved a contempt resolution against Stephen Bannon, another Trump associate.

“As with Mr. Bannon, the Select Committee has no desire to be placed in this situation but Mr. Clark has left us no other choice. He chose this path. He knew what consequences he might face if he did so. This committee and this House must insist on accountability in the face of that sort of defiance,” Thompson said at the committee hearing on the evening of Dec. 1.

According to Thompson, Clark’s attorney had informed the committee prior to the scheduled contempt vote that Clark intends to assert his Fifth Amendment right against self-incrimination. Thompson scheduled another deposition for Dec. 4 to afford Clark the opportunity to do so but moved forward with the contempt recommendation nonetheless.

“Mr. Clark still has that opportunity, and I hope he takes advantage of it, but we will not allow anyone to run out the clock, and we will insist that he must appear on this Saturday,” Thompson said.

According to Thompson, Clark told the committee, “I think that we’re done,” and walked out of the deposition on Nov. 5.

According to an October report by the Democrat-led Senate Judiciary Committee, Clark pitched a plan to DOJ leadership on Dec. 28, 2020, for the department to announce a probe into voting irregularities in Georgia and to recommend that the state’s legislature convene a special session to consider an alternate slate of electors.

Clark’s draft letter outlining the proposal called for the same plan to be executed in each of the five other states where Trump had challenged the election outcome: Michigan, Pennsylvania, Wisconsin, Arizona, and Nevada.

“There is no chance that I would sign this letter or anything remotely like this,” Donoghue wrote to Clark.

Clark continued to push his plan after the rejection, the Senate report said. He eventually told Rosen that Trump had proposed firing Rosen and appointing Clark as the acting attorney general, the report said. The back and forth culminated in a White House meeting during which Rosen and Donoghue told Trump that senior DOJ officials would resign if Trump carried out his plan, according to the report.

Congress went on to certify Joe Biden as the winner of the 2020 election. The certification session was interrupted when Trump supporters breached the Capitol on Jan. 6. A Capitol police officer shot and killed one supporter before the mostly peaceful crowd was cleared out.