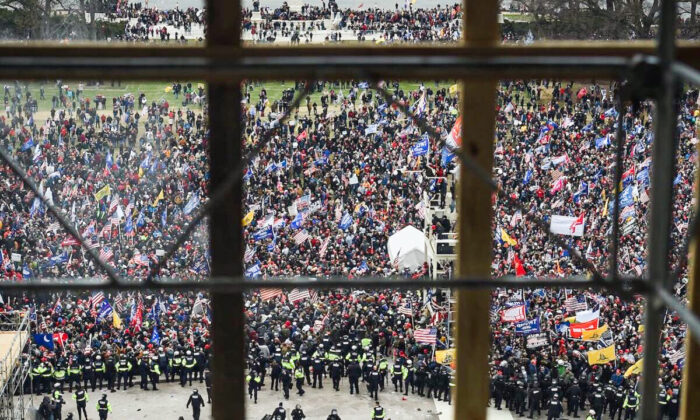 Police and protesters outside the U.S. Capitol's Rotunda in Washington on Jan. 6, 2021. (Olivier Douliery/AFP via Getty Images)
US News

Two Jan. 6 defendants who pleaded guilty to illegal parading or picketing at the U.S. Capitol were each sentenced Thursday to 36 months probation, a length of time the judge said was designed to last through the next two election cycles to deter “political violence.”

Judge Beryl Howell, chief judge of U.S. District Court for the District of Columbia, was critical of prosecutors for repeatedly making plea agreements using the misdemeanor charge of parading, demonstrating, or picketing in a Capitol building. She said the charge in essence makes light of Jan. 6.

Howell emphasized to both defendants that what happened on Jan. 6, 2021, was not a political protest, nor could be considered speech protected by the First Amendment. She questioned both men on whether they believed at any time that the 2020 presidential election was “stolen.”

James D. Lollis Jr. of Greer, South Carolina pleaded guilty to one count of parading, demonstrating, or picketing in a Capitol building. Lollis was convicted of entering the U.S. Capitol, affixing a “[expletive] Antifa” sticker to the wall, and spending about five minutes in the building.

Judge Howell sentenced Lollis to three years probation and three months of home detention and ordered him to pay $500 restitution and to perform 100 hours of community service within a year.

“The court finds a sentence of probation coupled with a period of home detention would be appropriate to ensure he is subject to the next couple of election cycles, that he does not engage in the political violence that occurred on January 6th,” the judge said.

‘Be Careful of the Company You Keep’

Howell said she found Lollis’ tearful and emotional apology to the court, police, and those who work at the Capitol to be “very eloquent.”

“I certainly hope when you say that you’ve been ‘cast off’ by other conservatives, that you remind yourself that you have to be careful of the company you keep,” Howell said, “and perhaps people who are critical of you taking responsibility for your actions, criminal conduct on Jan. 6th, are not company you want to keep.”

Lollis said his unsuccessful attempts that day to get police to lend assistance to a man who collapsed and had no pulse have left him with post-traumatic stress disorder, for which he is being treated with medication and intensive therapy.

“I began to tell them that I had found a man 25 to 30 feet away and I assumed he was in cardiac arrest and he was turning purple,” Lollis said. “To my dismay, I was sprayed in the face with a healthy dose of the hottest pepper spray that I can imagine. I stumbled back through the crowd, unable to breathe, in excruciating pain, not knowing where I was or which direction to go to leave.”

Judge Howell also sentenced Brian E. Stenz of Norristown, Pa., to three years probation and 14 days in jail for one count of parading, demonstrating, or picketing in a Capitol building. She imposed a $2,500 fine and ordered Stenz to pay $500 restitution. As part of a plea deal, three other charges were dismissed.

According to prosecutors, Stenz entered into a U.S. Senator’s office at the Capitol, where he took photographs of himself.

“A lengthy period of probation would be appropriate to ensure the subject’s supervision for a period of three years,” Howell said, “taking us through the next two election cycles, so he does not again engage in political violence that occurred on January 6th…”

During a nearly 90-minute sentencing hearing, Howell spent more than 11 minutes questioning prosecutors for using the parading charge, which she suggested led to confusion among the public that Jan. 6 was merely a protest that got out of hand.

“Does the government accept some responsibility … for helping to foster some confusion about whether what occurred on January 6th was a protest or legitimate political discourse?” Judge Howell asked.

“In the public discourse, there continues to be a theme that what happened on January 6th was a protest gone wrong by some people,” she said.

James Pearce, an appellate attorney at the U.S. Department of Justice, told Howell the charging decisions are a “policy-level determination.”

“I don’t think it is the government’s role to be engaged with the political conversation about the political significance about January 6th,” Pearce said. “What we are doing is ensuring criminal responsibility for what happened on January 6th.”

After an extended back and forth with Pearce over appropriate charges and plea negotiations, Howell said: “I take it from what you’re saying is that the government does not acknowledge any responsibility in the confusion in some parts of the public about whether it was just a protest on January 6th.”

Pearce replied that he had not paid attention to whether the charges used against defendants could underlie the public believing Jan. 6 was legitimate public discourse or not.