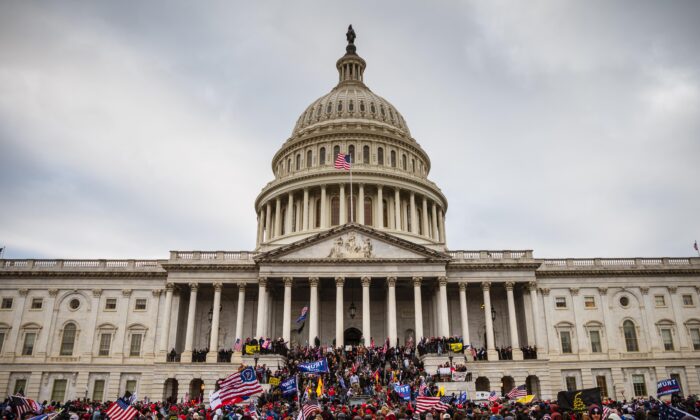 A large group of protesters stand on the East steps of the Capitol Building in Washington, on Jan. 6, 2021. (Jon Cherry/Getty Images)
Democrats

The Democrat-majority committee probing the events that unfolded at the U.S. Capitol on Jan. 6 has issued letters to 15 telecommunications and social media companies, including giants such as Facebook, Twitter, and Google, asking them to provide a series of documents related to the day.

According to a statement from the select committee, Rep. Bennie Thompson (D-Miss.), its chairman, is giving the companies two weeks to provide “information including records related to the spread of misinformation, efforts to overturn the 2020 election or prevent the certification of the results, domestic violent extremism, and foreign influence in the 2020 election.”

Specifically, the committee is seeking “a range of records, including data, reports, analyses, and communications stretching back to spring of 2020.” It is also “seeking information on policy changes social media companies adopted—or failed to adopt—to address the spread of false information, violent extremism, and foreign malign influence, including decisions on banning material from platforms and contacts with law enforcement and other government entities.”

Facebook in a statement to multiple outlets confirmed it had received the documents request, adding that it looks forward to working with the committee. Snapchat and Reddit issued similar comments.

Google, which owns YouTube, also confirmed receipt of the letter and said it would cooperate with the request. It called the events of Jan. 6 “unprecedented and tragic,” adding that Google and YouTube “strongly condemn them.”

“We’re committed to protecting our platforms from abuse, including by rigorously enforcing our policies for content related to the events of January 6,” Google said.

In a statement, Gab CEO Andrew Torba confirmed receipt of the letter from the committee and said the company has a “zero-tolerance policy towards threats of violence and unlawful speech.”

Separately, 8kun owner Jim Watkins confirmed the receipt of the committee’s letter in a post on Telegram, sharing a screenshot of the first page of the letter.

Lawmakers on Jan. 6 gathered at the U.S. Capitol for a joint session of Congress to count and certify electoral votes for the 2020 presidential election. It was interrupted when a small group of rioters led a breach of the Capitol building as thousands of protesters, mostly peaceful, remained outside. It remains unclear who instigated the incident.

Thompson said in the statement that the select committee “is examining the facts, circumstances, and causes of the attack and relating to the peaceful transfer of power, in order to identify and evaluate lessons learned and to recommend corrective laws, policies, procedures, rules, or regulations.”

The latest records request was announced two days after the committee announced that it’s seeking records from eight executive branch agencies, including the National Archives and Records Administration (NARA).

That sweeping request included seeking archived communications from the Trump White House. The former president in a statement accused the committee of carrying out a “partisan exercise … at the expense of long-standing legal principles of privilege.”

“Executive privilege will be defended, not just on behalf of my Administration and the Patriots who worked beside me, but on behalf of the Office of the President of the United States and the future of our Nation,” former President Donald Trump said.

The events of Jan. 6 culminated in a Democrat-pushed second impeachment trial of Trump, who was ultimately acquitted of an insurrection incitement charge in February by the Senate.

More than 500 people have been arrested and charged in cases related to the events on Jan. 6 at the Capitol. Among them, more than 50 are being held pretrial in solitary confinement for 23 hours a day, in conditions that are “unconstitutional” and violate “every single basic human right,” lawyers representing several of the defendants previously told EpochTV.

Four police officers on July 27 recounted to a House of Representatives special committee that they were beaten and threatened amid clashes with the protesters on Jan. 6. More than 100 police officers were reportedly injured in the aftermath of the Jan. 6 incident.

A total of five deaths were recorded in the immediate aftermath of the Jan. 6 incident. Of the deaths, Trump supporter Ashli Babbitt was determined to have died from homicide. The officer who killed her, Capitol Police Lt. Michael Byrd, defended his actions in an interview with NBC that was aired on Aug. 26.

Another Capitol officer, Brian Sicknick, was determined to have died of natural causes. Another three people died outside the Capitol building, with two of the deaths due to natural causes, and the remaining death ruled as an accident.

The Democrat-majority House voted in late June to form the select committee, which House Speaker Nancy Pelosi (D-Calif.) had proposed in mid-February.

Pelosi previously rejected two of five Republican lawmakers that House Minority Leader Kevin McCarthy (R-Calif.) nominated for the commission. In response, McCarthy said her rejection represented “an egregious abuse of power” and that Republicans “will not be party to their sham process and will instead pursue our own investigation of the facts.”