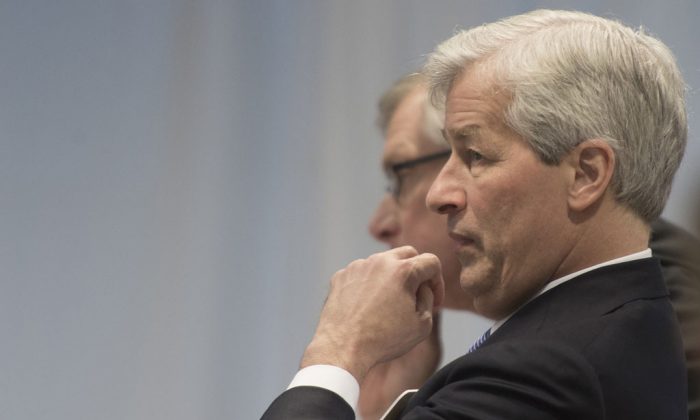 Jamie Dimon, chairman, president and CEO JPMorgan Chase, listens to US President Barack Obama address a group of business leaders at the quarterly meeting of the Business Roundtable in Washington on Dec. 3, 2014. (Nicholas Kamm/AFP/Getty Images)
News

Although we are very far from banking executives actually going to jail for crimes committed under their watch, some of them are finally being pushed out by shareholders.

While Barclay’s CEO Robert Diamond resigned in 2012 over the LIBOR rate-rigging scandal, the co-heads of Deutsche Bank, Anshu Jain and Jürgen Fitschen, announced their resignations on June 7, roughly three years after they took office.

A Deutsche Bank insider said investment banker Jain’s obsession with being successful on Wall Street led to the buildup of $64 trillion in derivatives exposure and many shortcuts regarding regulation.

But even Fitschen, who came from the traditional banking side of the firm, has his own legacy of scandals. He is currently on trial for alleged misrepresentation during the bankruptcy of German media company Kirch AG.

Their shareholder approval rating plummeted from 90 percent the year before to around two-thirds this year. After a slew of scandals and roughly $9 billion in litigation costs, one has to give them credit for taking responsibility and packing their bags.

And while Deutsche Bank is rightly criticized for being involved in pretty much every possible scandal out there and more (Kirch!), there is one American banking CEO who despite having a worse track record seems to have an immunity to scandals like FIFA’s Sepp Blatter, at least until recently.

“If I owned JPMorgan Chase, he would be running it and he would be making more money than the directors are paying him,” said Warren Buffett about—you guessed it—Jamie Dimon, who has recently joined the ranks of billionaires.

Since taking over as CEO in late 2005, Dimon has presided over more scandals, more litigation fines, and more bailouts than any other banking CEO in history.

But why? Since taking over as CEO is late 2005, Dimon has presided over more scandals, more litigation fines ($35 billion and counting), and more bailouts than any other banking CEO in history.

From the manipulation of electricity prices, the so-called London Whale trader scandal, to robo-signing perjuries and mortgage fraud settlements with the DOJ, JPMorgan Chase & Co. under Dimon’s tenure did even worse than Deutsche Bank.

In addition, at least Deutsche Bank wasn’t bailed out during the financial crisis, but JPMorgan was and benefited from additional bailouts during its takeover of Bear Stearns in early 2008.

In the end, it’s all about the money.

So how can Dimon not be stepping down and is instead being praised by the media and people like Warren Buffett? In the end, it’s all about the money.

JPMorgan’s share price is up 70 percent since the end of 2005 when Dimon took over; Deutsche Bank shares lost 1 percent over the tenure of Fitschen and Jain.