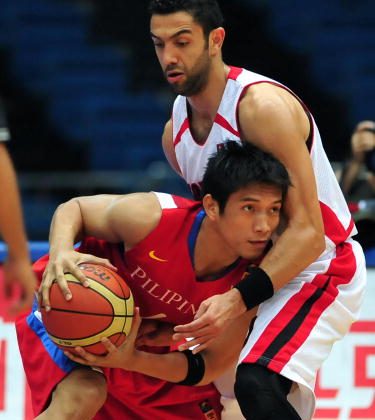 James Yap, the Filipino basketball star for the San Mig Super Coffee Mixers, said he has another child, according to reports.

According to MB.com, he has another child other than James “Bimby” Yap Jr., who is seven.

“Actually, I want to thank my ex-girlfriend because no matter the issue I faced, she remained quiet and never spoke ill of me,” he said, reported the Inquirer.

He said he fathered the child before he married Kris Aquino.

The two were married for seven years before it was annulled.

“I want to coach young people in high school. I want to share my experience with them. It would be great to help them, and see them play for the PBA (Philippine Basketball Association) someday,” he said.

Aquino hasn’t said anything about the matter.

TORONTO (AP) — Kyle Lowry is staying with the Toronto Raptors after leading them to the Atlantic Division title.

The point guard has agreed to re-sign with the Raptors, his agent confirmed Wednesday night. Yahoo Sports reported that the deal was for four years and $48 million.

Lowry averaged career highs of 17.9 points and 7.4 assists for the Raptors, who were one of the NBA’sbiggest surprises in going 48-34. They were expected to be one of league’s worst teams, particularly after trading forward Rudy Gay early in the season, but instead nearly reached the Eastern Conference semifinals before falling to Brooklyn in seven games.

They were led by their guard tandem of Lowry and All-Star DeMar DeRozan, who will be staying together.

Lowry posted a picture of himself on Twitter in a Raptors jersey, writing that Toronto would be his home city.

He was considered the top point guard available and reportedly targeted by contending teams such as Miami and Houston during free agency before deciding to stay put.

Contracts can’t be signed until July 10.

Lowry has also played for Memphis and Houston, which traded him to Toronto in 2012. The 2006 first-round pick by the Grizzlies out of Villanova has career averages of 11.7 points and 5.4 assists.