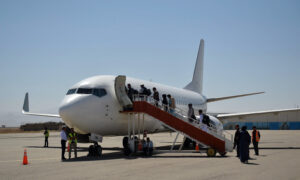 James Wright Foley, an American journalist kidnapped in 2012, was beheaded in an ISIS video released on Tuesday, August 19.

The video is titled “A Message to America.”

A figure in a black robe with a gun strapped on his person and a masked hat covering his face, apart from his eyes, appears in the video next to Foley.

In the video, the Islamic State says that U.S. President Barack Obama’s authorization of strikes against the group places the United States “upon a slippery slope towards a new war front against Muslims,” according to BNO.

“Any attempt by you, Obama, to deny Muslims liberty & safety under the Islamic caliphate, will result in the bloodshed of your people,” the ISIS fighter added.

Foley also speaks in the video, saying: “I call on my friends, family members and loved ones to rise up against my real killers, the U.S. government.”

Foley vanished in northwest Syria on Thanksgiving Day, November 22, in 2012.

Before that, he had reported independently from the Middle East for about five years, according to the Free James Foley website. Foley was 40 years old.

Journalist James Foley, of Rochester, N.H., responds to questions during an interview with The Associated Press, in Boston, Friday, May 27, 2011. (AP Photo/Steven Senne)

National Security Council spokeswoman Caitlin Hayden said in the first official U.S. reaction to the video: “We have seen a video that purports to be the murder of U.S. citizen James Foley by ISIS. The intelligence community is working as quickly as possible to determine its authenticity. If genuine, we are appalled by the brutal murder of an innocent American journalist and express our deepest condolences to his family and friends. We will provide more information when it is available.”

The White House later confirmed that the video was authentic.

Foley’s parents also confirmed the death in a statement, saying they “have never been prouder of him.”

“He gave his life trying to expose the world to the suffering of the Syrian people,” said Diane Foley. She implored the militants to spare the lives of other hostages. “Like Jim, they are innocents. They have no control over American government policy in Iraq, Syria or anywhere in the world.”

The video was later taken down by YouTube for violation of its policies.

Foley’s parents told AFP last year that they were still hoping for his safe return.

But there was little indication where Foley had been until the video appeared on Tuesday. “We haven’t been contacted by anybody asking for anything. No ransom requests,” father John Foley told AFP at the time.

Foley was one of an estimated dozens of journalists missing in Syria’s civil war.

ISIS is also known as ISIL, or The Islamic State of Iraq and the Levant. The Council of Foreign Relations says that the group “is a predominantly Sunni jihadist group, seeks to sow civil unrest in Iraq and the Levant (region spanning from southern Turkey to Egypt and including Syria, Lebanon, Israel, the Palestinian territories and Jordan) with the aim of establishing a caliphate — a single, transnational Islamic state based on sharia.”

It added: “The group emerged in the ashes of the U.S.-led invasion to oust Saddam Hussein as al-Qaida in Iraq (AQI), and the insurgency that followed provided it with fertile ground to wage a guerrilla war against coalition forces and their domestic allies.”

The group was originally launched by Abu Musab al-Zarqawi, who had commanded volunteers in Afghanistan before fleeing to Iraq in 2001. It was there that he joined militant Kurdish separatist movement Ansar al-Islam, which was the precursor to AQI, and led its Arab contingent.

Zarqawi later pledged support to Osama bin Laden, although they had a disagreement over the types of attacks they should launch.

Zarqawi was killed in a U.S. air strike in 2006, at which point Eguptian-born explosives expert Abu Ayyub al-Masti took over. The group is currently led by Abu Bakr al-Baghdadi, also known as Abu Du’a, who changed the group’s name to Islamic State of Iraq and Sham (ISIS), according to the U.S. State Department, which has a $10 million reward for information that helps authorities kill or capture the group’s leader.

A ribbon is tied to a tree outside the home of American freelance journalist James Foley, on Tuesday Aug. 19, 2014, in Rochester, N.H. (AP Photo/Jim Cole)

ROCHESTER, N.H.—Journalist James Foley had worked in a number of conflict zones in the Middle East, but the danger didn’t stop him from doing the job he loved.

Captured and held for six weeks while covering the uprising in Libya, he knew the risks when he went to Syria two years ago to cover the escalating violence there.

Foley was snatched again in Syria in November 2012 when the car he was riding in was stopped by four militants in a battle zone that Sunni rebel fighters and government forces were trying to control.

Foley’s family confirmed his death on a webpage created to rally support for him. His mother, Diane Foley, said in a statement on the webpage he “gave his life trying to expose the world to the suffering of the Syrian people.”

At Foley’s family home in Rochester, a light burned yellow in a center upstairs window and a yellow ribbon adorned a tree at the foot of the driveway. The Rev. Paul Gousse, of Our Lady of the Holy Rosary, where the Foleys are parishioners, spent about 45 minutes at the house but left without commenting.

Foley, 40, and another journalist were working in the northern province of Idlib in Syria when they were kidnapped near the village of Taftanaz.

After Foley disappeared, while contributing video for Agence France-Presse and the media company GlobalPost, his parents became fierce advocates for him and all those kidnapped in war zones. They held regular prayer vigils and worked with the U.S. and Syrian diplomatic corps to get whatever scraps of information they could.

Diane Foley, asked in January 2013 if her son had reservations about going to Syria, said softly: “Not enough.”

She wrote Tuesday on the family’s webpage, “We thank Jim for all the joy he gave us. He was an extraordinary son, brother, journalist and person.”

Foley had seen the dangers to journalists up close.

Upon his release from Libya and return to the United States, he recalled in an interview with The Associated Press seeing a colleague, South African photographer Anton Hammerl, killed by forces loyal to Libyan leader Moammar Gadhafi. He tried to pull his friend’s body out of harm’s way but was turned back by heavy fire.

“I’ll regret that day for the rest of my life. I’ll regret what happened to Anton,” Foley said. “I will constantly analyze that.”

Foley also covered the war in Afghanistan but called the Libyan fighting the worst he had ever experienced to that point.

Foley grew up in New Hampshire and studied history at Marquette University. He later taught in Arizona, Massachusetts and Chicago before switching careers to become a journalist, which he viewed as a calling.

“Journalism is journalism,” Foley said. “If I had a choice to do Nashua (New Hampshire) zoning meetings or give up journalism, I’ll do it. I love writing and reporting.”

British fighter appears to have role in beheading

LONDON—The black-clad Islamic militant fighter filmed in the beheading of American journalist James Foley appears to be British, the U.K. foreign minister said Wednesday — a development that underscores the insurgents’ increasingly sophisticated use of Western fighters to mobilize recruits and terrorize enemies.

Foreign Secretary Philip Hammond said the man in the video with Foley “appears to have been a British person.”

The masked militant in the clip speaks fluent English with what Lancaster University linguist Claire Hardaker said sounds like a London accent.

Hammond told the BBC that Britain was aware that U.K. nationals were involved in committing atrocities with Islamic State extremists and other organizations.

Hammond says the possible involvement of a Briton underscored the risks that those now fighting with Islamic militants could return to Britain and carry out attacks at home.

British officials have said that several hundred people from Britain have traveled to Syria to join the battle against President Bashar Assad, and some may have crossed into Iraq as part of the rapid advance of the Islamic State group. French and German officials have recently put the combined total of those countries around 1,300.

Shiraz Maher of the International Center for the Study of Radicalization at King’s College London, said the video was evidence that British jihadis were “some of the most vicious and vociferous fighters” in Syria and Iraq.

The group has previously used Western fighters in its recruitment videos. In June, it released a video showing British and Australian militants exhorting compatriots to join them in violent jihad.

Nigel Inkster, a terrorism expert at the International Institute for Strategic Studies, said the videos reflected an increasingly sophisticated media strategy designed to energize recruits and deliver to Western governments and citizens a message “of fear and a perception of inevitability.”