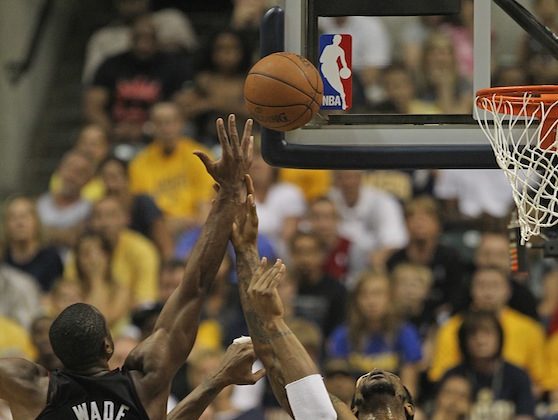 James Scores 40 as Heat Even Series

The NBA’s regular season MVP LeBron James had game-highs of 40 points, 18 rebounds, and 9 assists to lead the Miami Heat to a second-half comeback win, 101–93, over the Indiana Pacers to tie the series up at two games a piece.

Minus Chris Bosh, who may be out for the series with an abdomen injury, the bigger two-thirds of the Heat’s Big Three of James and Dwayne Wade were on fire—especially in the second half. The duo combined for 70 of the team’s 101 points overall, including 28 of the team’s 30 third-quarter points as the Heat quickly erased an eight-point halftime deficit.

Wade, who finished with 30 points on the day after having a horrible Game 3 in which he hit just two of 13 shots while scoring 5 points in the Heat’s 94–75 loss, got off to a slow start Sunday. The 30-year-old shooting guard missed seven of his first eight shots before hitting a 3-pointer and then a dunk just before halftime to cut an 11-point lead down to 8.

The makes were the first 2 of 12 straight shots hit by Wade from the floor from the second quarter to the fourth quarter.

James and Wade combined to score 39 points in a row at one point for Miami from late in the first half to near the end of the third quarter. And until Udonis Haslem hit back-to-back jumpers with five minutes left in the game, extending the Heat’s lead to seven points, no Miami players other than Wade or James had even hit a field goal since the first half.

Haslem finished with 14 points in 25 minutes while Wade, in addition to his 30 points grabbed 9 rebounds, and dished out 6 assists in a performance that could only be outdone by the versatile LeBron James.

Having to play power forward in the 6-foot-11-inch Bosh’s absence and match up against Indiana’s taller front line, the 6-foot-8-inch small forward hit 14 of 27 shots and 12 of 16 free throws while blocking two shots and coming up with a pair of steals at the other end. His 18 rebounds helped the Heat to a surprising 47–38 rebounding advantage over the taller Pacers.

The defensive pressure put on by James and Wade frustrated the Pacers’ shooting, especially in the second half. Indiana scored just 39 points after halftime and looked uncomfortable at times on offense, while being slow-footbed on defense despite Bosh’s absence.

Danny Granger led Indiana with 20 points, including 10 of the team’s 23 fourth-quarter points.

Game 5 of this series will be played Tuesday night in Miami.