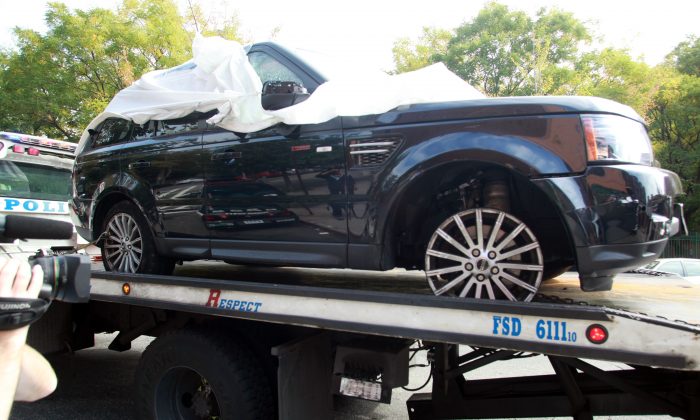 In this Oct. 5, 2013 file photo, the Range Rover involved in the bikers attack is moved from the police precinct for further police investigation in New York. (AP Photo/David Karp, File)
Crime and Incidents

James Kuehne, a Brooklyn resident who has worked as a plumber for 13 years, is the latest biker charged in the Manhattan biker attack.

It’s unclear exactly how the attack started, but video of the situation after its start shows a biker slowing down in front of SUV driver Alexian Lien and dozens of other bikers surrounding the SUV; Lien running over several bikers; and bikers giving chase down the West Side Highway before he’s caught up with and beaten.

Prosecutors said Kuehne, the seventh biker charged in the attack, had used his helmet to bash Lien as he lay on the ground. Kuehne was released on $200,000 bond after his arraignment on gang assault and other charges. He hasn’t entered a plea.

The Manhattan district attorney’s office says the 31-year-old Kuehne also broke part of the SUV’s back window with his helmet.

An eighth biker was arrested, but prosecutors didn’t file charges, at least for now.

Kuehne, 31, resides in Gravesend, Brooklyn, according to DNAInfo. His full charges are: gang assault, criminal possession of a weapon, assault, and criminal mischief.

The attack happened on September 29.