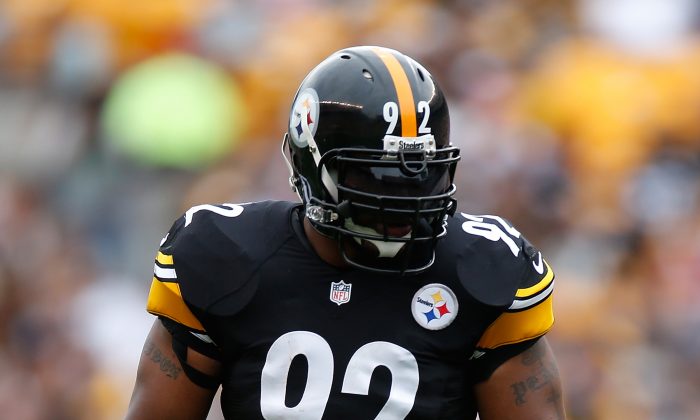 James Harrison was the NFL's Defensive Player of the Year in 2008 for the Pittsburgh Steelers. (Gregory Shamus/Getty Images)
Entertainment News

Longtime linebacker James Harrison, 39, who recently signed with the New England Patriots, was spotted standing alone for the national anthem before Sunday’s game.

The rest of the Patriots stood together on the sideline, while Harrison stood behind them prior to the kickoff against the New York Jets.

Harrison has not protested during the national anthem like others have, though he said he doesn’t have any objection to NFL players who decide to, saying, “If they feel like that’s something they want to do, that’s their right,” according to the Bleecher Report.

Many on social media were confused at the display and speculated about the reason, wondering if it was related to the protests, whether he was getting on with team members, or for some other reason.

As the Patriots lined up along the sideline for the national anthem, James Harrison stood alone by the bench. pic.twitter.com/X2hPth5aTz

Harrison signed with the Patriots this week after he was cut by the Steelers.

He was made active against the Jets.

The Patriots clinched a first-round bye, but the team can still get home-field advantage in the AFC playoffs with a win over the Jets.

Harrison said that the Steelers—a team he spent the majority of his career with—released a long statement after he was cut.

“They made a business decision and so did I,” he explained to the Pittsburgh Post-Gazette.

“If anybody thought I signed a two year deal with a team in the NFL at age 39 to sit on the bench and collect a check and a participation trophy, they’re mistaken,” he wrote. “I didn’t sign up to sit on the bench and be a cheerleader. I was clear about that when I signed, and I was told I would be on the field when I signed. When I was asking for reps in camp, I got none. I got lip service though: we know what you can do—you don’t need the reps. But I know what my body needs in order to be in shape to compete, and I said so, but still zero reps.

James Harrison released a long statement on his instagram page about his departure from the Steelers pic.twitter.com/WIQJnZPNCz

“At the beginning of the season, when it was clear I didn’t have a role anymore, I asked to be released. Throughout the season, I was told week in and out that I’d be used. I wasn’t. I started getting frustrated about the whole thing. I asked to not be dressed or take unnecessary practice reps if I wasn’t going to play. That’s what happened for a [couple] weeks, then we had a game week that I got solid reps in practice and everyone assumed I would play. I got to the stadium four hours early as usual, and my locker was empty. Nobody said anything to me about being inactive, just an empty locker. I asked to be released again. I was told no.

“A couple weeks later, they dress me for the game so I assume I’m going to play, and I get zero reps. Stood on the sideline the whole game. I asked to be released again, I was told no. Then a few days later, they released me. I was never told I would be brought back, it was: If I bring [you] back, be in shape. I cleared waivers, and they didn’t call. New England called. Also, to be clear, ask Ryan [Shazier] if I came to see him in the hospital. I didn’t help Bud [Dupree] or T.J. [Watt]? Ask T.J. if I helped him.

“Maybe I didn’t handle my frustration the best that I could’ve. If you haven’t learned anything about me over the last 16 years, I’m a competitor to my core. I live and breathe competition. I do what it takes to keep my body and my mind ready to be on that field. I do it for me, I do it for my family, I do it for my team and I do it for the fans. Nothing else to it. At the end of the day, they made a business decision and so did I.”