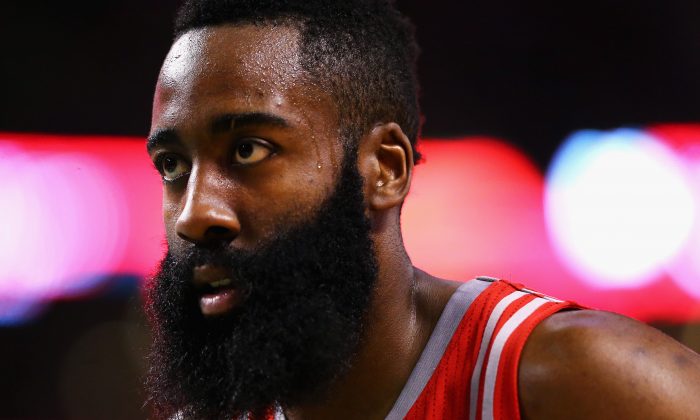 Houston Rockets guard James Harden declined to challenge Golden State Warriors guard Klay Thompson at the rim on a fast break opportunity during Golden State’s 115–106 win on Monday night. Harden appeared to take a light attempt at stealing the ball from Thompson before letting him go in for the easy two points.

Last year’s MVP runner-up was called out by TNT analyst Shaquille O’Neal for his lack of effort on defense.

It wasn’t the only time Harden’s defense seemed lacking in the loss. While defending Harrison Barnes on the block, Harden seemingly froze allowing Barnes to go right past him for the easy dunk.

At another point, Draymond Green took to posting Harden up just inside the three-point line. Although Green would figure to have enough of a weight advantage to be able to back Harden down into the lane, all it took was an adequate first step for the big man to get around Harden and in for the slam.

Harden did score 28 points and dish out 11 assists in the loss, but all in all, the eighth-seeded Rockets let a golden opportunity to get a game against the Stephen Curry-less Warriors slip by.