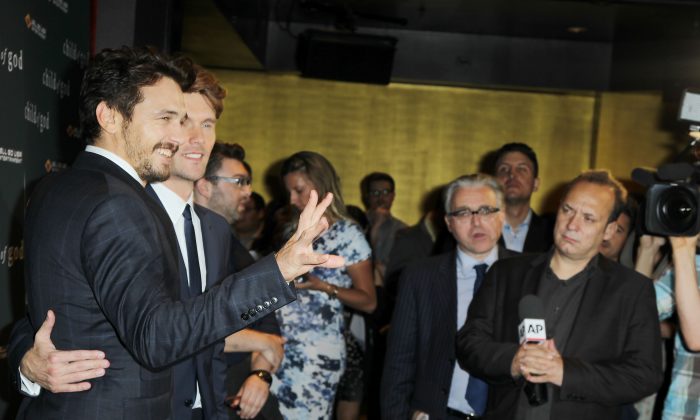 James Franco Will Make More Adaptations After ‘Child of God’

NEW YORK—At the premiere of his latest film adaptation of Cormac McCarthy’s “Child of God” dark thriller, director James Franco said he’s going to be developing his role as a director more in the future.

“As a director, I work best with adaptations… When I get an opportunity to adapt a book that I love I try and take it. And this was certainly a book I loved,” he said during the red carpet premiere for “Child of God” hosted at the Tribeca Hotel on July 30, 2014.

“Child of God” tells the story of an outcast Lester Ballard (Scott Haze) who traversed the woods after being shoed off his late father’s property in search of a human connection. Barbaric and primal, Ballard is a mad man on the loose.

“I wanted to make him seem scary because I think that’s how [the others] view him,” Franco said.

This film follows a handful of other adaptations Franco has done, like last year’s “As I Lay Dying,” and “The Broken Tower” which was based on a biography of poet Hart Crane.

Franco was heralded for taking a risk adapting “Child of God,” just as he was praised for his bravery with “As I Lay Dying,” since many filmmakers were said to have been eying the material for years, but not committing to adapting either novels.

“I just do whatever I can to make these things come to life. I know that they aren’t ‘Spiderman,’ they’re not going to make that kind of money, but we make them in a responsible way and with enough quality that they can have a life and hopefully because of that we’ll be able to make more,” Franco said.