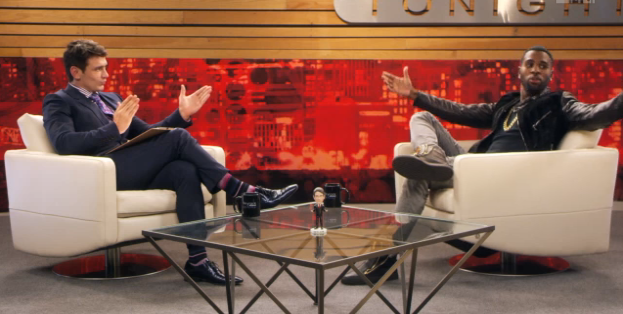 Jason Derulo, Nicki Minaj, and Iggy Azalea were all interviewed by Franco during the 30-minute special, where he was in character as “The Interview’s” entertainment journalist Dave Skylark.

Azalea is up for seven music award nominations at this year’s MTV VMA Awards on August 24, 2014.

During the fictional show “Skylark Tonight,” Franco poked fun at the singers by asking Derulo to sing his name, for Minaj to talk about the explicit photo on her latest album, and pick on Azalea and her Australian background.

Franco and Rogen have also used the opportunity to promote their latest comedy film “The Interview,” where Franco plays Dave Skylark and Rogen plays producer Aaron Rapoport. When the two discover that North Korea’s president is a big fan of the show they land an interview with him, but as they prepare to head out to Asia, they get intercepted by the CIA who recruits them to “take out” Kim Jong-un.

Watch the full length video below.