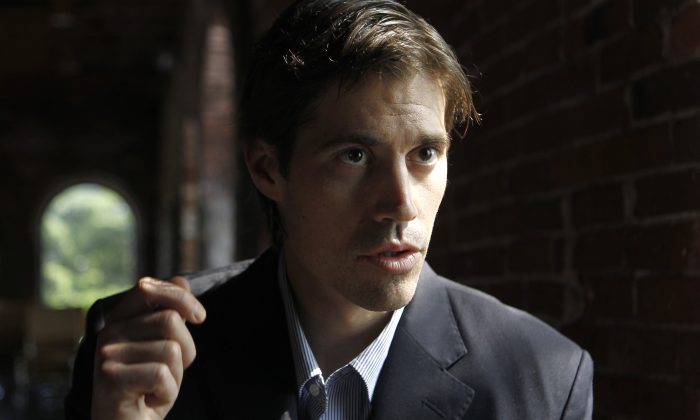 Journalist James Foley, of Rochester, N.H., responds to questions during an interview with The Associated Press, in Boston, Friday, May 27, 2011. Foley, who was working for the Boston-based GlobalPost while reporting in Libya, was captured along with two others by Libyan government forces on April 5, 2011, while reporting on the Libyan conflict. (AP Photo/Steven Senne)
Middle East

James Foley Video, Photos: People Share Photos and Memories of Reporter From Before He Was Captured

James Foley, an American journalist, was captured several years ago in Syria.

His exact whereabouts since then were never clear, and on Tuesday the ISIS terrorist organization released a graphic video showing the beheading of the 40-year-old.

Friends and colleagues are urging people not to watch the video.

“Do not watch the video. Honor James Foley’s memory. He was a good damn reporter. The world is less good without him,” said another.

The ISIS fighter in the video claimed that the beheading was meant to send a message to America to stay out of Iraq.

It appears that a second American was then brought into the video.

“The life of this American citizen, Obama, depends on your next decision,” the fighter said.

Foley was a freelance journalist who was working for GlobalPost when he was kidnapped on Thanksgiving in 2012 near the town of Tagtanaz in northern Syria as he was driving toward the Turkish border at the end of a reporting trip.

He wasn’t heard from after that, with his parents telling reporters in the winter of 2013 that they had received no information, including no ransom note or anything like that.

Phil Balboni, the president of GlobalPost, said in a statement last year that he remained hopeful that Foley was still alive and would be freed.

“As I write, it is still very hard to believe that an entire year has passed since Jim went missing. It’s been an agony for his family, especially his brave parents John and Diane Foley. For GlobalPost, it’s been a severe test of our endurance and our resources. Our investigation of Jim’s kidnapping has ranged across the Middle East and Europe,” he said in a statement.

“In order to preserve the security of our investigation, we’ve been unable to share much detailed information with the public or even with the GlobalPost family. But please know that our search for Jim has not slowed and that there are important leads being actively pursued even at this moment.”

Foley had been working in the Middle East for about five years, emphasizing that he believed “front-line journalism is important” in an interview with the Boston Globe.