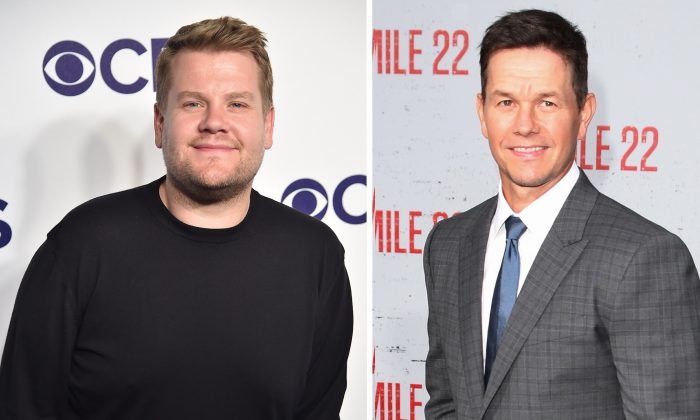 “The Late Late Show” host James Corden paid a visit to actor Mark Wahlberg’s house early in the morning for a hilarious segment of his Nov. 14 show. The athletically-challenged host had signed up for one of Wahlberg’s notoriously brutal 4:00 a.m. workout sessions.

Unfortunately, that meant Corden, 40, had to stumble out of bed at 2:25 a.m. The sleepy host took a quick shower and consulted Wahlberg’s Instagram schedule, which included prayer time at 2:45 a.m.

“He’s praying right now,” a delirious Corden said to the camera. “And so am I. I’m praying that he cancels.”

Wahlberg did not cancel, and Corden made his way to the actor’s home in the Beverly Park neighborhood of Los Angeles.

“I’ve never seen these roads so quiet,” Corden said along the way. He arrived at the actor’s front door right on time.

“This is the most ridiculous thing,” Corden said as he walked into Wahlberg’s home gym. “I’ve seen one car on the journey here.”

“Isn’t it nice and peaceful, though?” asked Wahlberg, who lives with his wife Rhea Durham and their four children: 15-year-old Ella, 12-year-old Michael, 10-year-old Brendan, and 8-year-old Grace.

“I was more peaceful when I was flat out asleep. I was completely peaceful,” said Corden.

The 47-year-old actor warned Corden that “the workout’s gonna suck,” but he could look forward to turkey burgers and a shake afterward.

@j_corden is the newest member of the #4amclub. 💪 Tune in tonight @latelateshow

They started with some foam rolling and stretching to loosen up.

Wahlberg gave Corden several tips on how to get into “top top shape,” while the television host said he was completely fine with being in “bottom bottom shape.”

After what appeared to be an intense and varied workout, Wahlberg said they were finished with the warmup. At that point, Corden decided he’d had enough.

“Make sure he doesn’t throw up in my bathroom,” Wahlberg said as Corden was leaving.

Had a special guest join the 4am club. @octaviaspencer Amazing job!! Let’s keep pushing to be great! @performinspired #inspiredtobebetter

Other celebrities have also joined Wahlberg for his “4 a.m. club,” such as actress Octavia Spencer. Wahlberg said she did an “Amazing job!!”

Wahlberg has been nominated for two Oscars for his roles on the films “The Fighter” and “The Departed.” He was also nominated for a number of Emmys for his reality show “Wahlburgers” and the comedy “Entourage.”