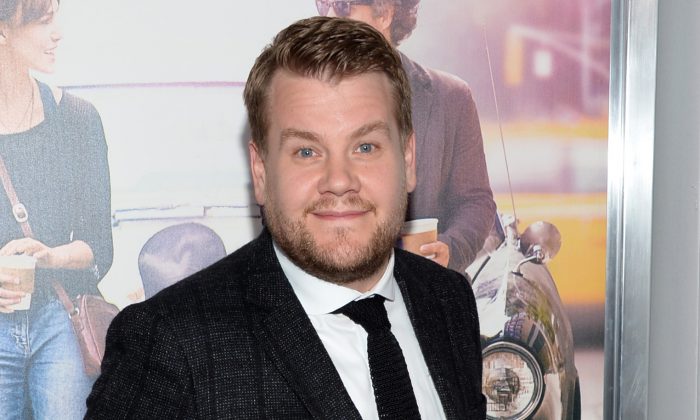 James Corden attends the premiere of "Begin Again" on June 25 in New York. Corden will host CBS' The Late Late Show in 2015 after Craig Ferguson steps down. (Evan Agostini/Invision/AP)
Entertainment

“CBS and I are not getting divorced, we are ‘consciously uncoupling,’ but we will still spend holidays together and share custody of the fake horse and robot skeleton, both of whom we love very much,” Ferguson said in a statement.

“While we’ll miss Craig and can’t thank him enough for his contributions to both the show and the Network, we respect his decision to move on, and we look forward to celebrating his final broadcasts during the next eight months,” wrote Chairman Nina Tassler of CBS Entertainment.

Feruson will not stay idle however, said CBS. He will be hosting “Celebrity Name Game”, a syndicated game show beginning this fall, and working on Television projects with his production company.

“I think he’s a really good comedian, and he’s really funny,” said Marissa Ray-Reyes, a fan from Ohio who was visiting Los Angeles. She said she watched The Late Late Show Monday night and had tickets again for Tuesday.

Other fans of late night television said they would give Corden a shot.

“If this guy can really just connect with a certain audience, I think he can make it,” said Devin Harrison, a student in L.A..

Corden is quite well known in his home country, having hosted the Brit Awards, a British version of the Emmys, for the last five years. He also won a British Academy of Film and Television Arts (BAFTA) award in 2008 for BBC sitcom “Gavin and Stacy”, which he co-created, and a Tony award in 2012 for his performance in Broadway’s “One Man, Two Guvnors”.

“I can’t describe how thrilled and honoured I am to be taking over from the brilliant Craig Ferguson,” said Corden in a statement. “To be asked to host such a prestigious show on America’s 1 network is hugely exciting. I can’t wait to get started, and will do my very best to make a show America will enjoy.”

Currently James Corden is working alongside Johnny Depp and Meryl Streep in the film adaptation of the musical “Into the Woods”, to be released in December. His latest performance in “Begin Again”, starring Keira Knightly, Mark Ruffalo, and Adam Levine, debuted earlier this year.

Rumors have been circulating that the show may no longer be based in L.A.. CBS said in a statement the location, producer, and other creative elements of the show will be announced at a later date.