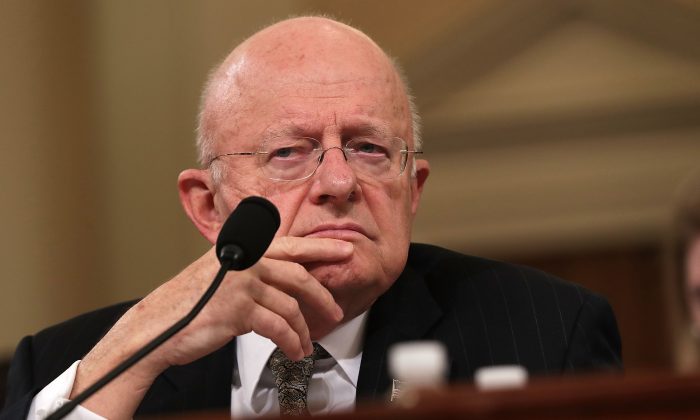 Then Director of National Intelligence James Clapper testifies during a hearing before the House Select Intelligence Committee on Nov. 17, 2016. (Alex Wong/Getty Images)
US News

WASHINGTON—President Obama’s controversial former Director of National Intelligence James Clapper said that he still thinks the government’s mass surveillance of the American people is a necessary measure to safeguard national security. Clapper was recorded lying to the U.S. Congress about such programs in the past.

Clapper said on Tuesday that he thinks the various U.S. intelligence agencies should be more invasive in their global mass surveillance efforts, which include spying on the communications of the American people.

Speaking to a full room of students at the Elliott School of International Affairs at George Washington University, Clapper encouraged students to pursue a career in the U.S. intelligence agencies, but offered the same justification he repeated over the years on the supposed necessity of intrusive mass surveillance programs that such a career might end up engaging in.

Clapper did not deny there should be a balance between national security and the need for privacy, but insisted that the balance has shifted to the privacy side, and the government should have more power. “General feeling [among the public] is there is too much surveillance, until an attack happens,” said Clapper.

Clapper was previously caught lying to Congress regarding the extent of mass surveillance programs done by U.S. intelligence agencies. During a congressional hearing on March 12, 2013, Senator Ron Wyden of Oregon asked Clapper whether the National Security Agency collects “any type of data at all on millions or hundreds of millions of Americans,” to which Clapper infamously answered: “Not wittingly.”

Documents leaked by Edward Snowden later that year revealed that U.S. intelligence agencies were indeed conducting massive surveillance programs that include the collection of telephone “metadata” on millions of Americans, and such programs were done systematically and regularly. Clapper was not fired by President Obama for lying under oath, despite strong calls from the Republicans urging Obama to do so.

Clapper said on Tuesday that Edward Snowden’s leaking was the “low point” of his career, supposedly because it exposed U.S. intelligence operations and inflicted damages on programs beyond mass surveillance. Clapper did not explain to students, many of whom major in international affairs and are contemplating public service, what they should learn from the controversial episodes of his past career.

Blaming WhatsApp For Being Too Secure

The call for a built-in backdoor to WhatsApp and other communication apps has been repeatedly rebuffed by experts, who say that encryption is a “have or have not” quality. Any backdoor in encryption can be exploited not just by the government but also by anyone with malicious intent.

“I can’t build an access technology that only works with proper legal authorization, or only for people with a particular citizenship or the proper morality,” wrote security expert Bruce Schneier. “The technology just doesn’t work that way.”

The Epoch Times has reported recently that WeChat, China’s most popular messaging app and the equivalent of WhatsApp there, has openly admitted to users that it shares just about all private user data with the Chinese regime. Earlier, the Chinese regime started a partial blocking of WhatsApp, as it was one of the few remaining secured messaging apps not controlled by the Communist Party regime.