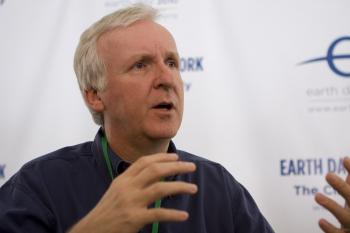 By Lisa Fan and Matthew Robertson
Print
Before speaking to a receptive crowd about the dangers of climate change on Earth Day in Washington DC late last month, Director James Cameron spoke to The Epoch Times about the key to success in his movies, Titanic and Avatar, and how they relate to the themes of the day’s rally. He said that the films were not about simply changing people’s thoughts but affecting them on a subconscious level.

“Both Titanic and Avatar have certain things in common,” Mr. Cameron said. For instance, “They both are good stories,” both exemplify strong characters, and “both films are orchestrated in such a way that has an emotional effect on people.”

Each of the films “taps into the angst of the zeitgeist of the future,” Mr. Cameron explained. In this reading, Titanic becomes a metaphor of the destruction of the world and the class system; Avatar presents the earth as a dying planet, and “appeals to the people who are more connected to the nature and to each other.”

“The success of the Avatar is very interesting,” Mr. Cameron observes. “I think it says less about the movie’s ability to change people’s minds than about the movie’s ability to key into what people are thinking at the subconscious level.” At the intellectual level, we’re in denial about the state of the planet, Mr. Cameron argues, “but at the subconscious level, we know the truth. And the truth is we need be much more respectful of the nature and the natural boundaries and deadlines. We need sort of collectively public to wake up to this.”

The inclusion of a multiplicity of cultural influences also helped with the film's success, Mr. Cameron says. “I find every time you include something from the different cultures in the world, people feel a sense of connection to the movie,” he added. “I think Hollywood should take some notes from this.”

And the element of timing was part of the secret sauce. “People are interested in the natural world enough to go to see what’s left out there and its beauty,” he said, adding that such experiences can bring personal change and a reinvigorated sense of purpose. The urban environment as a sole habitat is limiting. “People need to get outside. People need to reconnect to nature. I think collectively as a society, we live in a nature deficit disorder. For people to have a sense of what’s being lost, they have to have a sense of responsibility.”

This is first to be realized on a personal level, such as in the raising of children with values. “Reconnect to the value system,” was Mr. Cameron’s exhortation.