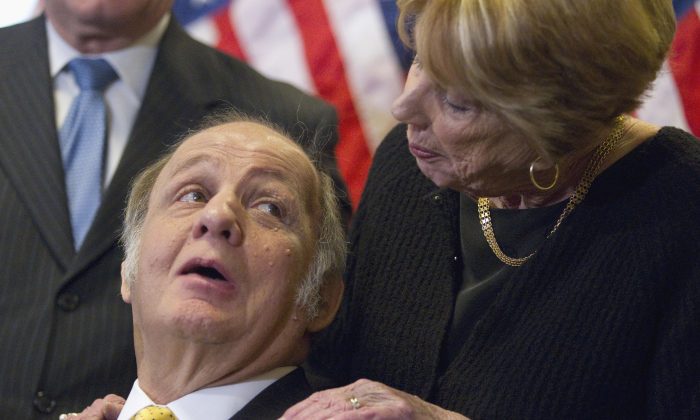 James Brady was known for his playfulness and humor. He kept that quality even after being severely wounded during the 1981 assassination attempt on President Ronald Reagan. He was Reagan’s press secretary.

A major trait that endeared Brady to the Washington press corps was his sense of humor, especially when he made fun of his own boss.

When Ronald Reagan was campaigning for president in 1980, Reagan drew scorn from environmentalists for saying that trees were a greater source of pollution than cars. Aboard the campaign plane, Brady pointed at a forest fire in the distance and yelled, “Killer trees! Killer trees!” to the great amusement of reporters.

“We are heartbroken to share the news that our beloved Jim “Bear” Brady has passed away after a series of health issues,” Brady’s family said in a statement. “His wife, Sarah; son, Scott; and daughter, Missy, are so thankful to have had the opportunity to say their farewells.”

“Jim Brady’s zest for life was apparent to all who knew him, and despite his injuries and the pain he endured every day, he used his humor, wit, and charm to bring smiles to others and make the world a better place,” the family statement said.

Brady suffered a bullet wound to his head outside the Washington Hilton Hotel on March 30, 1981. Although he returned to the White House only briefly, he was allowed to keep the title of presidential press secretary and his White House salary until Reagan left office in January 1989.

Brady, who spent much of the rest of his life in a wheelchair, died at a retirement community in Alexandria, Va., where he lived with his wife.

A federal law requiring a background check on handgun buyers bears his name, as does the White House press briefing room.

John Hinckley Jr., Reagan’s would-be assassin, shot Brady, shot Regan in the chest and arm, and shot a Secret Service agent. Brady’s head wound was severe and left him paralyzed and in constant pain, and with memory and speech difficulties.

In spite of that, he remained a force in public life. He worked for gun control. Handgun Control Inc. was renamed The Brady Campaign to Prevent Gun Violence in his honor.

Sarah Brady became involved in gun-control efforts in 1985, and later chaired Handgun Control Inc., but Brady took a few more years to join her, and Reagan did not endorse their efforts until 10 years after he was shot. Reagan’s surprise endorsement—he was a longtime National Rifle Association member and opponent of gun control laws—began to turn the tide in Congress.

“They’re not going to accuse him of being some bed-wetting liberal, no way can they do that,” said Brady, who had become an active lobbyist for the bill.

The Brady law required a five-day wait and background check before a handgun could be sold. In November 1993, as President Bill Clinton signed the bill into law, Brady said: “Every once in a while you need to wake up and smell the propane. I needed to be hit in the head before I started hitting the bricks.”

The waiting period requirement in the original bill expired and has been replaced with a background check.

His namesake organization continues to work for gun control. “Because of Jim’s hard work and the policy that bears his name—the Brady Handgun Violence Prevention Act—an estimated 2 million gun sales to criminals, domestic abusers, and other dangerous people have been blocked. As a result, countless lives have been saved. In fact, there are few Americans in history who are as directly responsible for saving as many lives as Jim,” said Brady Campaign President Dan Gross, in a statement.

Brady and his wife made a video for New Yorkers for Gun Safety in 2013. In it, she said, “Thanks to the courage and leadership of Governor Cuomo, New York state passed the strongest gun law in the country. We need Washington to show the same courage as New York.”