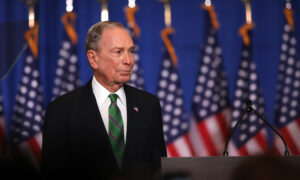 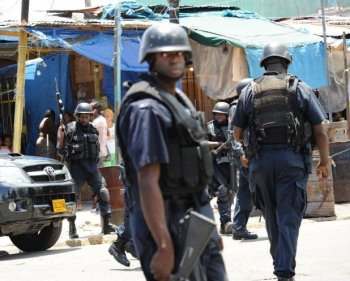 Jamaica Attacks: Police patrol on May 24 in Kingston, Jamaica, after two police officers were killed after coming under attack amid spreading unrest. A state of emergency was declared by the Prime Minister. (Anthony Foster/AFP/Getty Images)
US

Jamaican attacks against local police have intensified in Kingston, the country's capital, prompting Prime Minister Bruce Golding to declare a state of emergency.

"The Cabinet took the decision … declaring that a state of public emergency exists in the parishes of Kingston and St. Andrew," read a statement from the Office of the Prime Minister.

The one-month state of emergency was declared Sunday, May 23 as supporters of businessman and alleged drug lord Christopher "Dudus" Coke tried to prevent his arrest and extradition to the United States.

Coke is alleged to be the leader of the Shower Posse, an international crime organization whose name derives from the quantity of automatic bullets used in its shootings.

"Credible intelligence, indicate that scores of criminals from several gangs across the island have joined … to launch coordinated attacks on the security forces," said Commissioner of Police Owen Ellington to the Jamaica Gleaner.

People erected barricades across streets and wore signs expressing their support for Coke who is seen as a godfather figure in his local community.

A group of Coke supporters killed two police and injured six others after the police responded to a distress call by a female motorist saying she had been shot at.

There were also instances of looting and a police station was set ablaze.

The Jamaican prime minister urged citizens to be calm and supportive during the state of emergency, and said the threats would “be repelled with strong and decisive action.” He hopes to reopen schools Tuesday after the violence dies down, reported the Jamaica Gleaner.

The police shootings in Kingston have also brought concern to local airlines. Multiple flights leaving Kingston Monday evening were canceled and local Air Jamaica workers were told to keep an eye on the local press for any updates involving travel out of the city.