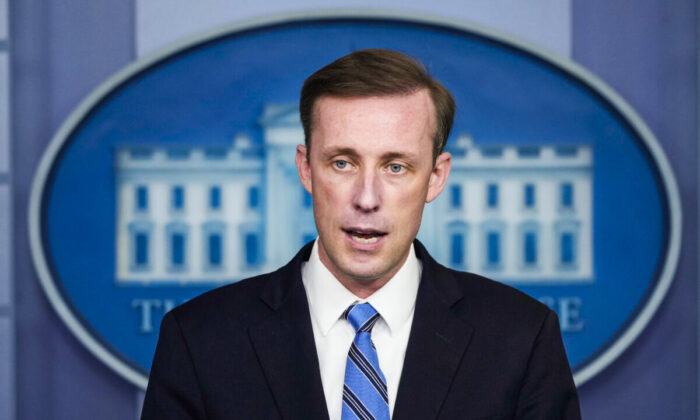 U.S. National Security Advisor Jake Sullivan met with Saudi Vice Minister of Defense Khalid bin Salman bin Abdulaziz Al-Saud in Washington Tuesday and “underscored the longstanding partnership” between the two nations ahead of a joint planning committee at the Department of Defense this week.

The meeting comes as oil prices are in part driving up gas prices and inflation stateside in the wake of the Russia-Ukraine conflict, and days before the U.S.-Saudi Arabia Strategic Joint Planning Committee this week, which the Saudi prince will co-chair.

The meeting comes as Saudi Arabia and the United Arab Emirates warned on May 10 of strains on the energy industry, with spare energy capacity decreasing in all energy sectors as key producers reduce investment in fossil fuels, pushing oil, diesel, and natural gas to trade at near-record highs.

Suhail al Mazrouei, the UAE’s energy minister, said a lack of global investment means that OPEC countries, which export crude oil, would be unable to guarantee sufficient supplies of oil for customers as the world economy fully recovers from the pandemic.

Meanwhile, Saudi oil giant Aramco on May 15 posted its highest profits since its initial public offering in 2019. The world’s largest oil exporter disclosed in its first-quarter 2022 results that it has made $39.5 billion in earnings in the first quarter of 2022, an 83 percent rise year on year, boosted by increased demand and sharply rising prices.

The Biden administration is reportedly seeking to improve relations with Saudi Arabia as it pushes the country to increase its output of oil ahead of Biden’s visit to the Middle East in June.

In March, Biden announced the United States would release an unprecedented 180 million barrels of oil from the nation’s Strategic Petroleum Reserve over the next several months in a bid to lower gas prices and ease inflationary pressure.

These barrels were due to be released into the market at a pace of 1 million barrels per day on average for the next six months starting in May. This would occur in concert with releases from other countries around the world, according to a senior administration official.

U.S. gas prices hit a then-record high on May 10—the same day Saudi Arabia and the United Arab Emirates made their warning—as crude oil remained above $100 per barrel, with some states seeing prices above $5 per gallon.

The average price for regular unleaded gas on May 10 was $4.374 per gallon, beating the earlier record of $4.331 per gallon set on March 11, prior to Biden’s decision to dip into the oil reserves.

Some critics say that the Biden administration’s energy policies, like blocking the Keystone XL pipeline project and restricting drilling on federal lands, have also created supply problems in the domestic market, making the United States once again dependent on foreign oil.

Katabella Roberts and Naveen Athrappully contributed to this report.