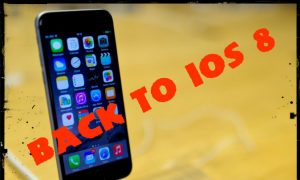 Here is How You Can Downgrade Back to iOS 8.0
0
Share Now
TelegramFacebookTweetEmailTellMeWeReddit
Copy Link
Tech

Jailbreak iOS 8 / iPhone 6: Pangu and evad3rs Updates Are Not Out Just Yet; Beware of Scams from YouTube Videos

There’s been a spate of scams surrounding the iOS 8 jailbreak. Neither evad3rs or Pangu–the two most popular jailbreaking teams–have released updates.

On YouTube, a few people have uploaded how-to videos on jailbreaking with Pangu, but iOS 8 users should be wary of any links shared. One YouTube video purported to show a user jailbreaking his iPhone, but on closer examination, the user appeared to have switched his iOS 8 phone to an iOS 7 phone to show that it was “jailbroken.” The user also directed users to what appears to be a scam website designed to look like Pangu’s site.

If you see any jailbreak software from websites other than Evasi0n or Pangu, there’s a chance it might be a scam.

Regarding iOS 8’s jailbreak, hacker MuscleNerd wrote last week: “To 2014’s new jailbreakers: if you update to today’s iOS 8.0, you’ll lose your JB and won’t be able to go back to 7.x. Beware … (For completeness: The only group of users able to downgrade from 8.0 will be old-school iPad2 users with 4.x or 5.x blobs, using redsn0w),” he said.

But he said that “there will always be more holes.”

According to iJailbreak, Pangu gave an official update about its progress a few days ago, saying: “[Reminder] Just 1 day before iOS 8 official release, guess that devices except iPhone 4 can’t be restored with 7.1.2 firmware. If you want to jailbreak please grab the last moment. For iOS 8, we are already on the way…”

“After MuscleNerd’s recent statement that an iOS 8 jailbreak is still possible, the Pangu Team has now confirmed that they are indeed working on one. If you remember, the Pangu Team was the first to release a public tool that made iOS 7.1.x jailbreak possible. Now that iOS 8 is here and there’s no way to downgrade to iOS 7.1.2, people are going to be waiting on an iOS 8 jailbreak,” the site says.